Ohio Gov. John Kasich’s expansion of Medicaid under the 2010 federal health law has cost taxpayers $7 billion in a little more than two years.

The federal government — which is $19 trillion in debt — paid $390 million for Ohio Medicaid expansion benefits in February, bringing the program’s total cost since January 2014 to $7.1 billion.

Kasich frames his Obamacare expansion as a fiscally responsible way to keep drug addicts and the mentally ill out of prison, even as costs zoom past his projections. The expansion was $1.5 billion over budget after 18 months.

“Ohio’s Obamacare expansion has already run $3.1 billion over budget and is on track to run nearly $8 billion over budget by the end of next year,” Jonathan Ingram, research director at the free-market Foundation for Government Accountability, told Watchdog.org. 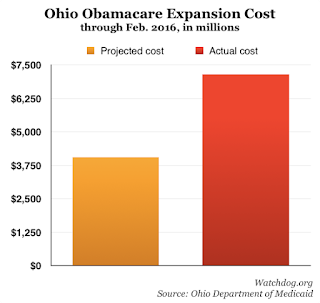 “Finding the funding to pay for those overruns will mean fewer resources for education, public safety, and care for the most vulnerable,” Ingram said.

Obamacare expansion spending already dwarfs the monthly budgets of many state programs; disbursements for the Ohio Department of Rehabilitation and Corrections, for example, totaled $100 million in February.

Ingram noted that changes to the state’s Medicaid eligibility determination process will soon bump thousands of disabled Ohioans from the Medicaid rolls, while 670,000 able-bodied, working-age adults are enrolled under Kasich’s Obamacare expansion.

Kasich says the expansion let him “bring 14 billion of our dollars home,” but it’s paid for with new federal deficit spending.

And the costs are only going to go up for the state. Five percent of benefit costs will fall to state taxpayers starting in 2017, with the state share increasing to 10 percent by 2020.

The Republican governor and presidential candidate’s $14 billion estimate for 2014-20 is nowhere near what his Medicaid expansion will actually cost state and federal taxpayers, based on the latest Ohio Department of Medicaid data.

Propelled by Obamacare expansion, Ohio’s Medicaid program cost $1 billion more through February than at the same point in 2015, a 6.6 percent increase.

Contrary to Kasich’s campaign trail claims, Obamacare expansion makes anyone with income at or below 138 percent of the poverty line eligible for Medicaid, regardless of whether they have a job or need treatment for drug addiction or mental illness.

Before Obamacare, Medicaid coverage in Ohio was restricted to pregnant women, children, the elderly, the disabled, impoverished families, and women seeking tests or treatment for breast or cervical cancer.

Ohio receives federal money for 62 percent of traditional Medicaid costs. A much larger share of Obamacare expansion is federally funded, giving state lawmakers an incentive to cut services for the truly needy while putting working-age adults with no kids and no disabilities on welfare.

In addition to his administration’s pending eligibility changes for Ohioans with disabilities, last spring Kasich proposed cutting the income limit for pregnant women and the Breast and Cervical Cancer Project from 200 percent to 138 percent of poverty.

Republicans in the Ohio General Assembly rejected Kasich’s eligibility cuts for pregnant women and the BCCP.

The governor’s office did not respond to a request for comment on Obamacare expansion costs.