POLITICAL SUICIDE: Bend Over! GOP Prepares to Perform Amnesty Colonoscopy on Conservative Base

I shook the Magic 8-Ball and it read: "Signs point to yes".

In January 2012, the “Immigration Reform” page on the official House website of Representative Bob Goodlatte, chairman of the House Judiciary Committee, said: “In no event should we grant amnesty to those who have broken our laws and entered the country illegally. Doing so would simply invite more illegal immigration in the future.” 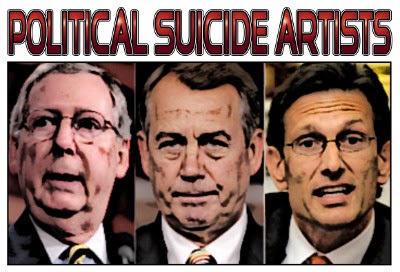 According to Politico, Chairman Goodlatte said in a Telemundo interview that is set to air on Sunday that he is very open to legalizing current illegal immigrants...

...Representative Goodlatte’s Telemundo comments come at a time when some in House leadership are trying to revive the fortunes of a big immigration deal or series of deals — on Friday morning on the House floor, Majority Leader Eric Cantor argued that “immigration reform could be an economic boon to this country.”

The insanity of this effort on the part of the U.S. Chamber of Commerce and GOP Congressional leaders cannot be overstated.

Point 1: In the midst of a horrific, ongoing, five-year long unemployment crisis, the importation of millions of low-skilled, largely illiterate, non-English-speaking aliens will crush the wages of blue-collar American citizens.

Point 2: On the heels of the unfolding Obamacare catastrophe -- with millions of Americans already having lost their health insurance and up to 120 million more poised to lose their insurance next year -- Republicans intend to hand Obama and the entire Democrat Party a huge legislative victory.

Point 3: Such an act would also represent a slap in the face to the vast majority of American people -- and especially the conservative Republican base -- who oppose Amnesty. Republicans would pay a horrific price for such traitorous behavior in the 2014 Midterms.

Point 4: Legalization is certain to result in eventual citizenship for these illegals (as confirmed by Democrat Rep. Luis Gutierrez) and would prove devastating for the GOP in the years to come. Pew Research reports that 88 percent of illegals would vote Democrat if given the chance. And they will be given that chance, if they are legalized.

This is political suicide for the Republican Party. In their zeal for corporate donations, they are abandoning the base and handing the opposition a tremendous political victory.

Should this come to pass, let the record show that John Boehner, Eric Cantor and Mitch McConnell were the architects of the destruction of the Republican Party.

all right rino GOP.. lying obama only enforces laws that he likes you all WILL give him illegals amnesty.. lying obama will keep the parts he waNTS AND FORGET ABOUT EVERYTHING ELSE
nO VOTE FOR gop RINOS IN 2014... IF ILLEGALS AMNESTY IS PASSED BY THE rino REPUBLICANS

STAY HOME FOR VOTING RINOS IN 2014.. BETTER TO HAVE DEMOCRATS SINK THE USA.. RATHER RERPUBLICANS DO IT DRIP BY DRIP

Establishment RINO's selling out Conservatives? So what's new? They've been doing that since the Bob Dole for president fiasco.

even better than staying home, you should vote democratic instead, it does more damage to the rinos.

Out of high school in 75 I learned to tape drywall before joining the Navy. Over my lifetime I have had to return to this trade, although I have two undergraduate degrees. The depressing nature of the illegals has cost me tens of thousands of dollars. They now dominate the trade from the southern to northern border, whereas it used to only hurt in the south (from Tucson). Now in my later years I am doing electrical engineering. And low and behold I am seeing more and more Indian, Pakistani, and now Bangladeshi subcontractors for huge corporations, Siemens, GE, Arinc, AECOM... These guys are going to do to white color jobs as the South and Central Americans did to the construction trades. It is coming.

The Chamber of Commerce fronting for big corps to get rino republicans to pass illegals amnesty
The big corps want cheap labor to keep fattening their profits
Wonder how pauli ryan can justify saying there is a labor shortage in America so illegals amnesty needs to pass
Just look . 92 Million people in Americadon't work and rinos say lets add more

If you folk's could keep this Level of Intensity up, and just channel it AGAINST the democrats?

By taking democrats to COURT when ever you think that they are wrong, Oh! Oh! Oh! Oh! you WOULD make this REPUBLICAN one of the happiest on earth.

The democrats attack us in soooo many ways. One of their all time favs is through the court system.

Please! PLEASE! PRETTY PLEASE WITH SUGAR ON TOP. Show the Democrat's that there is a GOD, and that the RIGHTEOUS DO WIN.


The democrat's are out there GO GET THEM.

hey where you been ...there was rino boehner attacking conservatives all the while keeping his mouth shut as obama keeps violating the Constitution
The level of haterd rino boehner expressed against conservatives 4 weeks will not be forgotten
cantot ryan and the rerst of rinos just might as well become democrats.. these rinos lose my money and vote in 2014

the republicans God ...is big money from bis corps,, Republicans no longer care about American Middle CLASS and they lose the House in 2014