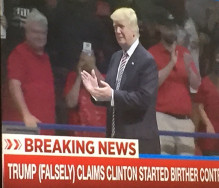 Hillary Clinton surrogate Sid Blumenthal personally pitched a reporter on the President Obama “birther” story when she was campaigning for president in 2008, a former Washington reporter said Thursday.

The Clinton campaign and the media have consistently refuted Trump’s claim Clinton started the birther movement, which Trump re-upped Friday when he said for the first publicly that he believes Obama was born in the United States. “Hillary Clinton and her campaign of 2008 started the birther controversy,” Trump said, drawing a slew of media fact checks almost immediately. “I finished it.”

But former McClatchy Washington Bureau Chief James Asher has backed up Trump’s version of events, saying he was personally pitched the story by a Clinton surrogate in 2008.

Clinton had tweeted: “President Obama’s successor cannot and will not be the man who led the racist birther movement. Period.”

And McClatchy replied: “@HillaryClinton So why did your man #sidblumenthal spread the #obama birther rumor to me in 2008, asking us to investigate? Remember?”

@HillaryClinton So why did your man #sidblumenthal spread the #obama birther rumor to me in 2008, asking us to investigate? Remember?

Blumenthal is a former aide to Clinton’s husband Bill Clinton and their long-time friend.

Nevertheless, as soon as Trump reiterated his criticism Clinton started the birther movement, the media started churning out fact checks.

“I covered it at the time,” CNN’s Jake Tapper said Friday, referring to the movement. “She and her campaign never, never started the birther issue.”

Although Hillary may not have uttered the words that Obama was not born in the US she definitely was part of it. Sid Blumenthal started it and used her base to spread it. Larry Johnson has a very good write up of the whole situation from the inside which confirms the above story...... http://www.noquarterusa.net/blog/79319/confessions-hillary-insider/