The UK is building a wall to keep the denizens of the Calais "Jungle" migrant camp from invading cars and trucks after some 22,000 breaches of the port road. The “Jungle” is a nightmare for the local population which has been terrorized by the mob of migrants aspiring to invade the UK.

Merkel’s open invitation to a migrant invasion occasioned the same round of finger-pointing, often, as with the Calais crisis, not at those countries that let the migrants in, but those who did not wish to take them in. Eastern European countries were most frequently blamed for not doing their “share” to maintain the wonderful open borders which required accepting anyone wandering through them.

Instead of bringing countries together, open borders create conflicts.

The Schengen Area didn’t unite Europe. Even before the mob of Muslim migrants arrived, the ability of foreign workers to just show up in the UK was generating some of the tensions that led to Brexit. 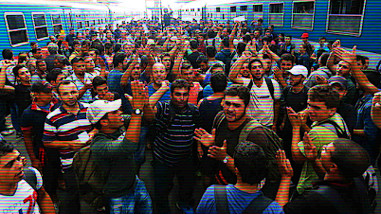 The biggest source of tension between America and Mexico remains the open border. Not only is the open border bad for America, but it’s bad for Mexico. As profitable as the remittances might be, the cost of the cartels and migrants drawn to that border end up offsetting it.

What globalists fail to understand is that good walls really do make for better neighbors. Countries with walls may occasionally invade each other, but a lack of walls means that the invasion never stops. Walls are torn down in the name of peace, but the lack of walls is what makes peace impossible.

In war, a bunch of foreigners show up to take your entire way of life. The citizens of countless countries are asking whether this is really any different than the peace offered by the borderless world.

When countries control their own borders, they can negotiate an end to conflicts. But when they don’t, all they can do is assign blame. In the absence of the state, borders and nations are recreated by mass migration. The millions of Muslims invading Europe are but one example. There has been a similar mass movement out of Africa along the Middle East for some time. The end result isn’t integration, but tribalism. The borderless world was meant to banish tribalism, but instead it’s stronger than ever.

Tribalism does not go away when you eliminate borders. The ability to limit tribal conflicts does.

Think of Muslim terror as a tribal conflict. Migration transports the tribal violence that convulses Syria, Afghanistan and Iraq into our societies. The inevitable outcome is that tribalism is met with tribalism.

Republics can rise above tribalism only when they keep hostile tribes at bay. Enough empty idealism, enough lost jobs and enough bodies in the street and the republic falls and the tribe rises. Instead of transcending the nation state, open borders are more likely to revive it on new and different terms.

Current political developments in America and Europe have conclusively disproven the notion that eliminating borders also eliminates conflict. Obama likes to preach about the inevitable victory of his “right side of history”. Do Brexit and Trump look anything like his right side of history?

History has cycles rather than sides. Instead of coming to the end of history with a world government, the left has resurrected the old conflict between nomadic migrants and settled farmers. The farmer works the land. He learns skills and eventually produces a settled civilization. The nomad is barely literate. He has few skills, except those of crude violence, he overruns civilizations and sucks dry their resources and then goes on his way. This is what much of our clash of civilizations really looks like.

The grand effort at world peace has led to our civilization fighting marauding nomads in the street.

That is what happens when you make the mistake of thinking that borders keep you from making friends with the people on the other side, when they actually help prevent you from becoming enemies.

Fences and border markers among farmers avert land disputes. They keep squatters off your land. They embody the function of the law which is to prevent conflicts by making everyone’s responsibilities clear.

Eliminate them and you also eliminate rights and responsibilities and invite conflict.

A borderless world is not an ideal. You wouldn’t want anyone to be able stroll through your kitchen at any given moment. That would be most people’s idea of a nightmare.

A country that anyone can wander into at any given moment is a nightmare. It just takes us longer to realize that because usually it’s not our kitchen that they’re wandering through. And by the time they are wandering through our kitchen, it can often be too late. The troubles begin at the margins. They start in border towns and port cities, in working class neighborhoods that are already blighted.

And it’s easy to dismiss them and pay no attention.

Then suddenly, a decade or two later, 1,400 children have been abused by Muslim sex grooming gangs in Rotherham or ISIS is based in a neighborhood in Brussels. But it’s not suddenly at all. It’s that too many people who wouldn’t let strangers wander through their kitchens weren’t too concerned about who was wandering into border towns in Texas or troubled neighborhoods in Marseille or South Tel Aviv.

It didn’t affect them. Until it did. Or until it will.

Talk of building walls on the southern border is sneered at. Israel’s separation barrier is a target for hipsters from around the looking to fill their Instagram with theatrical protest pictures. Even Pope Francis made a point of praying at a concrete wall smeared with “Free Palestine” graffiti.

But walls are good things. Walls around our homes don’t just protect property, they protect our identity. It’s having walls that makes living in a house dignified. Dignity comes from having private spaces. Identity depends on our ability to choose who we are and who we are not, as individuals, as communities and as nations.

The European Union is collapsing because it tried to break down too many borders. Many living in the EU feel a loss of control, of identity and even of dignity at the individual and the national levels. Collectivism can make for a temporary heady rush, but it is ultimately demoralizing.

The right side of history is not collectivism, but individualism. To be an individual is to build walls. With walls the individual determines the terms on which he will interact with the wider world. It is these walls which protect him from collectivist impulses. It is these good walls which he can enter or exit on his own terms that set him free.

chris from outside of Chiraq said...

Good fences, defended with my 2nd Amendment Right to Bear Arms, guarantees that I have good neighbors!