The Invasion of Buffalo

Millard Fillmore was born in a log cabin in upstate New York. Fifty years later, he took office as the thirteenth president of the United States. Around that time he sold off a piece of land. That land became the neighborhood of Lovejoy in the city of Buffalo.

Lovejoy was named after Sarah Lovejoy who had been killed defending her home during the War of 1812. British forces had assaulted American towns once again by using their Indian allies as a terror weapon. Buffalo, now a major city, was burned to the ground with only four buildings left standing.

Mrs. Lovejoy told her son Henry, a 12-year-old boy who shouldered a musket too heavy for him to bear, to flee into the woods. She stayed behind. When the savages invaded her home, she tried to defend herself.

The invaders killed her with a tomahawk and scalped her body. A neighbor described how her “long Black hair reached to the Floor clotted with Blood.” Other families fled on sleds into the snow.

When the locals returned a few days later, the only living thing in Buffalo was a cat. There were no other survivors. Only corpses.

But within a week they began to rebuild.  By the time Fillmore sold his land, it was a city of 40,000. By the time Lovejoy was a neighborhood, it had surpassed 100,000. German, Polish, Jewish and Italian immigrants quickly filled Lovejoy and clung to it with the same tenacity that Sarah had.

And then another savage invasion began. 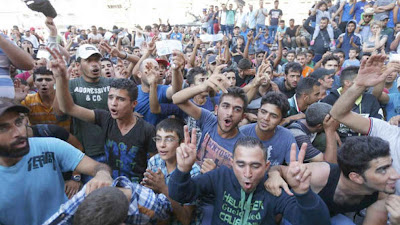 In the past decade, Erie County “resettled” nearly 10,000 refugees. Most of them have been inflicted on Buffalo and Black Rock, the same targets as that original invasion two centuries ago that claimed Sarah’s life.

Buffalo has four resettlement agencies working to bring as many Muslims as they can. Among them is the International Institute of Buffalo which was set up after WWI to bring “war brides” to America, but which now specializes in bringing Muslims here instead. Tickets to the Institute’s big event, Buffalo Without Borders, run as high as $10,000 a piece, and it is billed as “A Party Only the IIB Can Throw.”

One of these parties featured chocolates “inspired” by Iraqi Muslim migrants.

In Lovejoy though the price ranges are a little different. Like Sarah Lovejoy, the residents of this area, once Polish and Italian, are under siege.

A few months after September 11, Frank Scalisi passed away at the age of 92. For 50 years, Frank and his wife Edith had run Rosati’s Supermarket. Frank had presided over the Buffalo Retail Food Dealers and served as deputy sheriff for the Marine Division of Eric County. He coached a softball team in the sixties that became known as "The Goosport Phenomenon".

And then Rosati’s was no more and in its place was the IGA Community Express Mart run by the Alshami clan. The Alshamis were part of the flood of Yemeni Muslim migrants who had washed up in Buffalo.

And the Muslim Yemeni population has a way of making headlines.

Six Yemenis made up the infamous Buffalo Cell, who had attended the Al Farooq training camp in Afghanistan, met with Osama bin Laden and were convicted for providing material support to Al Qaeda. The seventh member of the cell, Jaber Elbaneh, is a fugitive still wanted by the FBI, which describes him as armed and dangerous.

There is a $5 million reward on his head.

The Alshamis were not quite so ambitious. There were no suicide bombings. Rosati’s Supermarket went from a neighborhood institution to a rat’s nest. There were illegal cigarettes for sale, building code violations, glass pipes and blunts, sales of secondhand merchandise without a license, cars present without license plates and piles of trash. There were multiple complaints about drug dealing and accusations that the Yemeni shop attracted drug dealers and possibly even sold drugs.

On the corner of Ludington and Davey, where the small modest houses fly American flags, this outpost of Yemen had become a malignant sore for the community.

Councilman Rich Fontana said, “Frank Scalisi would be turning in his grave if he knew what was going on there now.”

There’s little doubt of that.

Ahmed Alshami, the grim patriarch of the clan, was arrested with crack cocaine in his car. He was accused of making drug deliveries and berated neighborhood activists by posting a picture of himself raising the middle finger and boasting, “Long stay the Arab stores.”

Then he smashed someone over the head with a bottle.

Finally he was charged with massive food stamp fraud for buying food stamp cards from customers for pennies on the dollar and then going to Walmart to stock his shelves. Not to mention a spot of burglary.

Ahmed Alshami skipped out on Buffalo City Court, announcing that he was too busy. So his bail was set at $2 million. His wife shouted, “We’ve got the million dollars!” and “F___ America.”

The family, whose patriarch had ten previous arrests, and whose presence in Buffalo has been a source of trouble, have done that already. There is talk of deporting Alshami to Yemen if he’s convicted, but considering that Yemen is currently little more than a battlefield between Shiite and Sunni Jihadists, that seems highly unlikely. Without major reforms to our immigration and criminal justice system, they are here to stay.

The Alshami antics of shouting “F___ America” made their case go viral, but they’re not the exception.

This year, Alie Hassan of Buffalo’s Broadway Mart and Deli was given two years probation for buying food stamps. A few years ago, Riyadh Almadrahi of Zip’s Food and Beverage made over $140,000 by buying food stamps. The year after it was Nasser Ali Ghanem and  Yousef Yafai of the Hollywood Nights Prime Shop. The crimes echo each other and they are ubiquitous.

When politicians promise us that Muslim migration will create small businesses and produce jobs, they forget to mention who will be paying for them. There are some 5,000 Yemeni Muslim settlers in Buffalo. Population numbers have increased as much as 242%. While the traditional population in the area declines, with Christian and Jewish populations falling, the Islamic population continues to grow, fed by refugee resettlement.

Cheerful news stories celebrate how “refugees” are “bringing Buffalo back.” The question raised by the Alshamis and so many of their compatriots is what is Muslim migration doing to Buffalo?

Large numbers of Muslims have been dumped in the area from Afghanistan, Iraq, Somalia, Sudan and Yemen. Buffalo’s heritage and its working class roots are being traded for the Koran and the hijab.

Buffalo is listed by the State Department as a “preferred community” for resettling migrants. Sizable numbers of Syrian Muslim migrants are headed there now. It’s even been studied by European advocates for migrants. But the cost to ordinary American neighborhoods like Lovejoy has been overlooked. Media accounts trumpet the Iraqi markets opening up, they don’t look at what those markets are up to. There are celebrations of ethnic food accompanied by the decline of local American communities.

Buffalo has faced catastrophe before and recovered. But the question is how long will it take to salvage it from this latest invasion. America is being targeted, invaded and carved up town by town and city by city. Much as two centuries ago, Buffalo is being invaded. But the invaders are not a weapon being used by a foreign government against Americans. Instead this weapon is being wielded by our own government.

It appears our own government is as bad as ISIS; they are decimating our own population and replacing citizens with muslim foreigners, who don't want to become Americans, and who will never assimilate.