Our Summer Intern Biff Spackle scoops the world with the latest Hillary banner ads, to be unveiled any minute now. 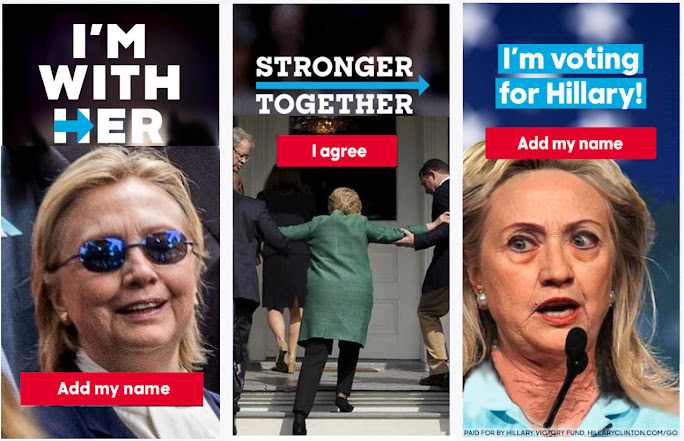 at 9:54 PM
Email ThisBlogThis!Share to TwitterShare to FacebookShare to Pinterest
Labels: Hillary, Water-cooler

Ugh ..., this hideous woman is the most despicable, power hungry, narcissistic, arrogant, corrupt, lying criminal that I have ever witnessed in my 70 years of life. The fact that she is even ALLOWED to run for President is pure witness that our government and the entrenched "leaders" and big money, corporate lobbyists, the US Chamber of Commerce and New/One World order fanatics and Soros, plus the main stream media are truly running the show. Corruption, mafia style, is alive and well. Unfortunately, ignorance and not giving a damn also is alive and well with indoctrinated, lazy and stupid people who have been brain-washed by educational institutions and Hollyweird and, again, the media, that the Marxist/Communists, with the help of Obama not enforcing the deportation of illegals and refugees, are bringing about the "fundamental transformation" of America. Plus, we have a complicit Congress (elected representatives of "the people" - yeah, right) who have sold their souls to big money, and the Democrats who have sold their souls to Soros, Marxism/Communism. In other words, the Uniparty (R & D leadership) and our America The Beautiful has been destroyed from within and they don't give a damn about America. It breaks my heart.

Wise up Killary supporters, because don't think that our life will be better with Killary as POTUS. If you believe that, then, at this point, you must not care for America or yourselves. Because, you have been conned, just like you were with Obama.

The Stronger Together banner ad is also a great graphical metaphor of socialism, which is the evil idea that humanity will be better when government forces each of us to live at the expse of the other. The result of course is that all are impoverished, except of course the leader we are forced to hold up.