The Clinton Conspiracy Against America

The Clinton Presidential Center sits near Interstate 30. It is located at 1200 President Clinton Ave in Little Rock, Arkansas. A mere 1,200 miles from the posh digs of the Clintons in Chappaqua, New York.

Little Rock advertises a “Billgrimage” to visit Bill Clinton’s roots in Little Rock, but the Clintons have gotten what they wanted out of Arkansas and Little Rock. And the Clinton Presidential Center.

They’ve moved on to bigger things since.

There isn’t much to do at the Clinton Presidential Center, an awkward glass building shaped like a bus that looks like it’s about to fall into the Arkansas River, but like the equally precarious political fortunes of the Clintons, never quite does.

There are exhibits of Bill’s rise to power. And there’s a gift shop offering a copy of GQ autographed by him for a mere $350, a bronze bust of him for only $29.95 and a t-shirt with the words, “I Miss Bill.”

But how can you miss somebody who never goes away?

They might miss Bill in Little Rock, which he left behind for wealthier places where he can mingle with those who can do far more to advance his career than the locals. Instead they have to make do with Buffalo Blue Cheeseburger at Forty Two, the Clinton Presidential Center’s restaurant, which also offers catering services.

If there’s one thing you can be sure of when it comes to the Clintons, they never miss an angle. 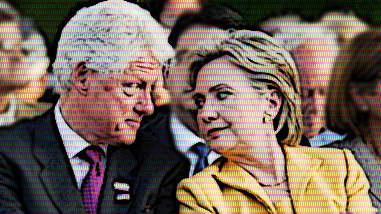 And that’s appropriate, since the Center began as a front for the Foundation.

It’s become a tradition for presidents to have their own libraries. Bill Clinton wanted to raise a modest $200 million for his glass shoebox on President Clinton Avenue. But he had to settle for $165 million.

A lot of the money came from abroad. The Saudis ponied up millions. Clinton’s former FBI director described him begging for a donation to his library from Prince Abdullah during a meeting asking the Saudis to give the FBI access to suspects in a terror attack which had killed 19 Americans.

"Bill Clinton raised the subject only to tell the crown prince that he understood the Saudi's reluctance to cooperate, and then he hit Abdullah up for a contribution to the Clinton Presidential Library,” he wrote.

The Clintons always have their priorities.

Cash also came from Marc Rich’s wife who bought a presidential pardon for the international fugitive for $450,000.

But the library wasn’t really a library. Bill Clinton wasn’t about to spend the rest of his days walking down President Clinton Avenue and deciding if he wanted to have breakfast at Gus’ World Famous Fried Chicken or Damgoode Pies. Hillary certainly wasn’t. The Clintons hadn’t made their base in Arkansas, but in New York. And they were drawing on taxpayer money to set up operations.

The Clintons were not retiring. They were not looking to their legacy. They didn’t care about the glass box on the Arkansas River. What they wanted was money and a platform for their comeback.

The Clintons didn’t just need cash to pay for their mansion and all the other good things in life. To make a comeback, they needed a staff. A big one. People willing to do anything for them. And they weren’t about to pay them out of their pockets. So, in an unprecedented turn of events, they turned to the Former President’s Act, meant to provide for the retirement of presidents, to begin the process of making the former president’s wife into a future president by maintaining their loyalist staff.

The Clintons are not idea people. They are crooked, but unimaginatively crooked. Bill is the sort of guy who will give a terror state a pass before asking for money. Hillary lies compulsively and badly.

The gargantuan octopus of the Clinton Foundation wasn’t the brainchild of two grifters who couldn’t convincingly lie about what they had for breakfast. It was the invention of those staffers around them.

At its peak, the idea people around the Clintons had a non-profit, private consulting jobs and government salaries through the State Department and occasionally the GSA. They had the best of government, the private sector and the non-profit sector rolled into one. The Clinton Network.

And they’re counting on a lot more of the same.

The Clinton Foundation was a spectacular slush fund, a fake charity that took in fortunes, paid out pittances and kept the country’s unwanted royal family and those around them in business.

Bill and Hillary were no longer individuals. They were a corporation, a business and a brand. Forget the sad gift shop in the Arkansas River shoebox. The Clinton Foundation let them go back to doing what they had done in office, tap into the deep pockets of foreign donors and lobbyists looking for access.

But the Clinton Foundation was a temporary cure. The Clintons were paying their staffers by selling access to themselves and assorted celebrities, corporations and billionaires. It was okay as a party, but you can only hear Bill’s funny stories twice before you reconsider the $15K ticket price tag.

For $250K, a company got some good publicity. But for that money, they could have plastered Manhattan with billboards.

The Clinton Foundation scam, the hundreds of millions of dollars rolling in, depended on maintaining the narrative that Hillary would become President Hillary. And when she lost, she picked the position that would be most tempting to foreign donors and certain domestic corporations, Secretary of State.

Somewhere along the way the Clinton White House had become a permanent institution. It could change shape, but it wouldn’t go away. It could morph into the Clinton Foundation and wear a number of disguises before it was ready to shed its chrysalis and become the Hillary Clinton 2016 campaign.

And yet they’re all the same thing.

After leaving the White House, the Clintons became a government in exile. Like the warlords or former kings living in Brussels or London, they maintained the structure of the old government. They sought out supporters who would help finance their return to power in exchange for future favors.

The Clinton Foundation is something alien to Americans, but quite familiar in certain settings. The Clintons and those around them treated term limits as a temporary setback to be overcome. And then the restoration of the Clinton Empire could commence. At the center were two corrupt, but not particularly bright royals, surrounded by a bevy of courtiers with extremely dubious agendas.

Some only wanted money. Others, like Huma Abedin, had more complex loyalties.

What all this amounted to was a coup. The Clintons were determined to become a perverse monarchy. And they were willing to take money from anyone and promise them anything to make it happen.

Even in the White House, Bill Clinton was willing to sell out murdered Americans to the Saudis in exchange for a big check. The Clinton Foundation was set up with blood money. It was funded by criminals and terrorists. And the final bill will only come due if Hillary Clinton takes office.

The Clintons have perpetrated a plot against America. They schemed with foreign interests to return to power. They subverted every democratic and ethical norm. They are not only criminals, but traitors.

American presidents were meant to retire. They were never supposed to use taxpayer money to set up cabals. It was unthinkable for them to solicit foreign rulers in a bid to return to power.

It can’t be dismantled without breaking up the Clinton Network. Criminal conspiracies aren’t shut down by closing a front group. The only way to end the Clinton Conspiracy is to indict and imprison the key players in this plot against America. As long as this rogue government exists, it is a threat to the republic.

To the author: Please make sure that you stay far away from the park that Vince Foster found himself!
Absolutely and accurately written summary about the Clinton Crime Syndicate! While the US Pravda only reports what's favorably to this crime couple - the Panama Papers also tell another and additional story about their money laundering op.