All these polls showing the low ranking of ‘climate change’ on lists of people’s concerns is getting rather repetitive, wouldn’t you say?

(No Tricks Zone) Over the last few years, the United Nations has been conducting an online poll, asking the world’s citizens —well, those fortunate enough to have access to electrical power, a computer, and the internet — what is most important to them, what concerns them most, or what issue they view as the highest priority for action.

In all, there are 16 priorities to choose from, ranging from phone and internet access to building more roads, protecting rivers and forests, better health care, etc.

Over 9.7 million people across all nations and age groups and educational and income levels have voted so far. And, shockingly, of the 16 listed priorities for action, “Action taken on climate change” ranks a distant 16th, or last.

The world’s citizens are more concerned about access to paved roads and phones than they are about taking action to combat the greatest threat facing mankind. 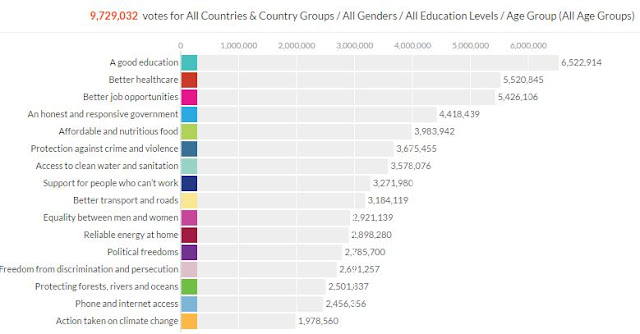 No Tricks Zone goes on to note:

And then highlights that there are tons and tons of scaremongering personal stories pushed by Warmists and their compliant media. Really, it all goes to show that there are things that people care quite a bit more than tiny changes in the climate.