Over at the Washington Examiner, Ashe Schow boils down the FBI's Labor Day weekend document dump to the bare essentials.

The top 10 revelations related to Hillary's interview with the FBI?

10. Hillary Clinton is incompetent (part I): she claimed she didn't know that a (C) marking on official government documents meant that it was classified as "Confidential".

8. Hillary Clinton couldn't recognize what documents should be protected: like emails regarding specific drone strikes, for instance. Hillary was fine with sending those over her unprotected, illegal, and bathroom-dwelling email server. 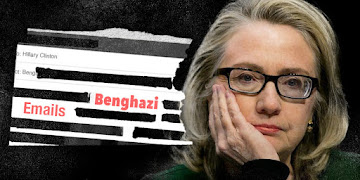 7. Hillary Clinton hid at least 18,000 work-related emails: far from turning over "all work-related emails", she hid tens of thousands of government-related communications, because they were all about yoga lessons and Clinton Foundation bribes, but mostly bribes.

6. Hillary Clinton used more than a dozen mobile email devices for State Department business: so much for the using "one device for convenience" lie.

5. Hillary Clinton repeatedly lost her mobile devices: but there were just a bunch of state secrets on them, so what's the big deal?

4. Hillary Clinton ignored government warnings not to use mobile devices for official business: "Clinton and her immediate staff were notified of foreign travel risks and were warned that digital threats began immediately upon landing in a foreign country, since connection of a mobile device to a local network provides opportunities for foreign adversaries to intercept voice and email transmissions..." --- and Clinton and her immediate staff, of course, ignored such warnings.

3. Hillary Clinton was never authorized to conduct State Department business on her private server: she was required to solicit and gain approval from the government in order to conduct official business on her home-brew, bathroom email server. She failed to do so. She ignored all official guidance.

1. 10. Clinton mass-deleted emails just after The New York Times revealed the private server: only three weeks after the Times revealed Clinton's private email server, the "oh sh**" moment occurred, according to the FBI. Electronic shredding was the result.

Yawn,
Barry, the Moose, Malaria, Satchmo, and Mrs. Robinson have hated the House built by European Artisans and take every opportunity to get away from it. Hillary will pay for her crimes by doing 8 years there.

I believe her Thighness won't be alive in 8 years. She's seriously ill. I doubt she'll make it to the inauguration, thus giving Barry another term.

Not 1 democrat has come out to criticize lying Clinton .. yet a full boatload of Rinos like McCain .Flake, Ayotte ,Jackass Kirk from Illinois ,,Sasse have bashed Trump..
Screw Washington Ruling Class Political Rinos