There’s a reason why David Brock chooses to house an unregistered Professional Solicitor in his office to raise money for his conglomerate of Super PACs and non-profits.

Professional Solicitors are required to disclose their active solicitation contracts. Brock wants his unregistered solicitor, the Bonner Group, to keep their client list hidden for a very specific reason:

David Brock has 7 non-profits, 3 Super PACs, one 527-committee, one LLC, one joint fundraising committee, and one unregistered solicitor crammed into his office in Washington DC.

Uncovered records expose a constant flow of money between these organizations.

The Bonner Group, his professional solicitor, works off a commission. Every time money gets passed around, Bonner receives a 12.5% cut.

Nonprofits are required to disclose who they give cash grants to.

But they aren’t required to disclose who gave them cash grants.

This weak system of one way verification is being abused by Brock. He’s been cycling money between his organizations for years, and the Bonner Group’s 12.5% commission gets triggered after every pass.

The Bonner Group was credited for raising these funds. Media Matters paid them a $1,147,882 commission.

Surprisingly, though, the Franklin Education Forum gave full credit to Bonner for raising that money. They paid the fundraiser a $124,250 commission in 2014!

It doesn’t stop there

Say, for example, you donate $1,062,857 to Media Matters for America. This is how David Brock would have used your charitable donation in 2014:

In the end, Brock’s solicitor would have pocketed $350,825, almost a third of your initial donation! That’s a far cry from the advertised 12.5% commission.

As bizarre as that scenario may sound, this is exactly what David Brock did in 2014.

How can we be sure this is intentional?

David Brock is the Chairman for each of these organizations! How could he not know what’s going on?

He’s a hands-on Chairman. According to their tax returns, Brock allocates time, weekly, to his organizations:

Furthermore, the New York Times reports that David Brock shares a summer rental in the Hamptons with Mary Pat Bonner, the President of the Bonner Group!

David Brock will have a hard time claiming ignorance on this. These transfers are intentional. He vacations with his solicitor. Case closed.

David Brock didn’t even bother to give his organizations different phone numbers. They all share the same phone number! 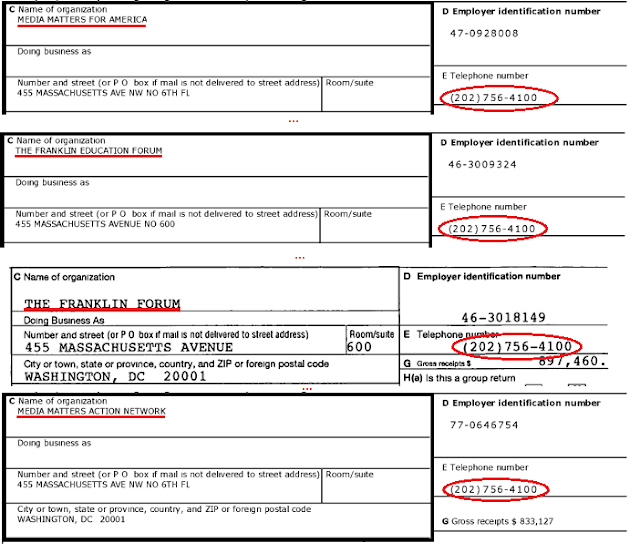 We even located the Bonner Group’s solicitation agreement with Media Matters on Florida’s Gift Givers’ Guide. Clarification on their commission can be found on page 2:

In English: Contractually, David Brock has the option to exclude certain contributions from triggering the commission. In spite of this option, he intentionally chooses to trigger the 12.5% commission for money grants between his organizations.

This barely scratches the surface

Utilizing public facing tax returns, along with records submitted to the FEC, we mapped out all the significant money transfers from 2014 that took place in Brock’s office: 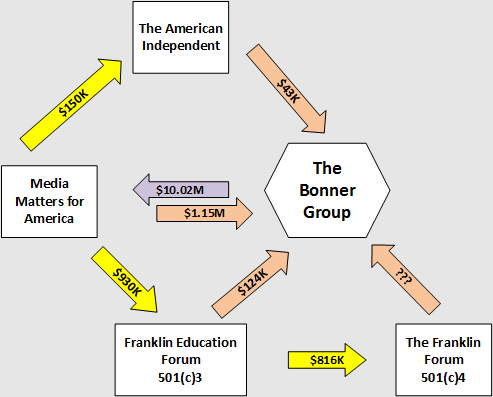 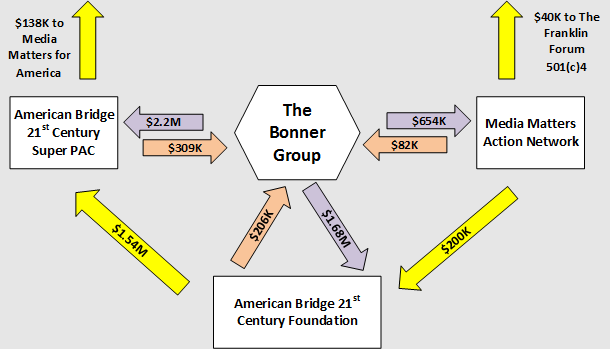 This is all from just one year! No further commentary required.

We understand this may be hard to believe. We first came across this in July, and are still having a hard time wrapping our heads around it.

All of the data referenced in this article originated from publicly accessible sources. Check for yourself – we provided links to the source material in our article exposing the organizations operating in Brock’s office, This data has been sitting out in the open, gathering dust for years!

We’ve spent months trying to find some sort of loophole to justify this activity. But there aren’t any loopholes. David Brock has something to hide. Just last week, The Daily Caller reported the following:

“Brock’s former long-time live-in boyfriend William Grey (whom Brock has thanked in several of his books) threatened to go to the IRS with damaging information about how Brock was running his Media Matters empire. What did Brock do? He paid Grey $850,000 to keep quiet. Brock reportedly had to sell his home in Rehoboth, Delaware to come up with the money. This certainly seems to indicate that Brock was terrified about what the authorities would uncover.”

Adding to this, Fox News reported the following:

“Next step is I contact all your donors and the IRS,” Grey wrote in an email dated May 19, 2010. “This is going to stink for you if you do not resolve this now.””

We believe that the information presented in this article is what has Brock so terrified. We feel confident in saying, with close to absolute certainty, that David Brock is laundering money through his Media Matters conglomerate.

Look at the argument we’ve been making on The Citizens Audit:

Adding to this, we can also say, with close to absolute certainty, that David Brock’s Media Matters conglomerate is breaking campaign finance law by illegally coordinating with the Clinton Campaign:

We still have a couple articles worth of content to publish, and hope to wrap things up by the end of this week. We will then focus our efforts on promoting and exposing our findings.

We’d also like to partner with you if you’re interested in reposting our content on your own site. Please send an email to Andrew@TheCitizensAudit.com to get started.

Read more at The Citizen's Audit.


This piece should be in the running for story of the decade. Blogs across America should be headlining this and screaming from the rooftops. If this could get enough exposure, the corrupt political establishment attack machine would be crippled by the outrage of American citizens. Which is exactly why this will be one the last times you'll ever hear about it unless you search it out on your own.