"TAKE THEIR GUNS AWAY": Trump Trolls Hillary and the Media's Anti-Gun Leftists Perfectly

For all of Donald Trump’s faults, he doesn’t shy away from being provocative. Sometimes this elicits a pure face-palm moment from Republicans. Others utterly tweek the noses of liberals/Democrats/progressives, putting them into apoplexy, and often highlights their hypocrisy and bias.

Right now, most of the media is losing their minds over the whole Obama birther thing, often conveniently forgetting that it was the Hillary 2008 campaign that started the whole thing. This is Big News for the liberal media, even as Obama has said to just move on (I’ve had CNN on since 645am, and half the coverage has been on birtherism). Can you blame them? They really do not want to cover Hillary’s poor health and negative campaign which is about aas exciting as watching grass grow.

Then we have this (which is the other half of CNN’s coverage this AM):

(UK Guardian) Mere hours after he appeared to put one of the oldest criticisms of his presidential campaign to rest with the acknowledgment that President Barack Obama was born in the United States, Republican presidential nominee Donald Trump told supporters that his opponent’s Secret Service detail should disarm itself due to what he characterized as her opposition to the Second Amendment.

“Take their guns away,” Trump said of Hillary Clinton, his Democratic opponent. “Let’s see what happens to her.”

This has led to a media freakout, with them wondering what Trump “really” means. Is he saying someone should attack her?!!!!!!!!! Which, of course, leads to a discussion that she is super precious, and needs protection from people carrying guns, many of which are illegal for private ownership. Does she need armed protection? Of course. So does the POTUS. But, what the media miss is that Hillary would like to erode the 2nd Amendment Right of citizens to own firearms for protection. 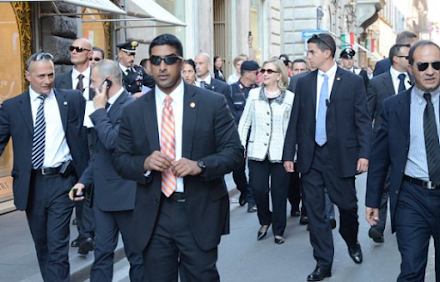 Speaking at a campaign rally in Miami, Florida, Trump criticized Clinton’s stance on gun-control issues, characterizing her stance as wanting to “abolish” the Second Amendment of the US Constitution, which protects the right to keep and bear arms. (This claim has been debunked.)

If Clinton were truly as anti-gun as she claims to be, Trump told the audience, her Secret Service detail should disarm itself.

“Let’s see what happens to her.”

Does Hillary want to abolish the 2nd Amendment? Of course she would never say that she does. One thing that you cannot say about her is that she’s an idiot. She’ll keep unpopular ideas like that quiet. She is for numerous ways to make it harder and harder for private citizens to arm themselves for protection while surrounding herself with guns. She’s all for removing Constitutional protections by using no fly lists and such, which are damned impossible to get off of, to restrict gun ownership. She’ll allow lawsuits against gun manufacturers. Taxes on guns and ammunition, making it hard for people to afford a weapon to protect themselves and their families. She’s against concealed carry and open carry. For other people, of course.

The question not being asked by liberals in high apoplexy is “if Hillary is allowed guns for protection, why aren’t private citizens?” We cannot afford to have lots of bodyguards, and the government isn’t going to pay for it, like for Hillary. We’re on our own. Perhaps the media should be asking why it’s OK for her but not us.

Trump has trolled the media and Democrats perfectly, because the more they yammer on about this, the more citizens will ask the question on double standards for gun protection.