MMNBC (Media Matters NBC) reports that the brilliant liberal majority in California may be getting their just desserts. Their tax refunds could come in the form of IOUs, which figure to be worth at least as much as the paper they're printed on. 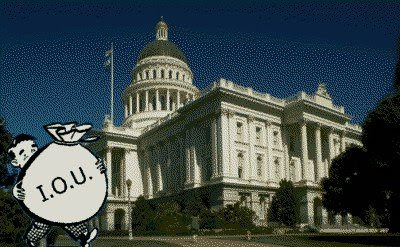 They're not calling them IOUs, of course (just like they don't call their ultimate aim socialism, though that's precisely what it appears to be). They call them "Registered Warrants".

California is rapidly running out of money. Blame it on the state budget deficit that continues to bleed billions of dollars from California's reserves. Facing inadequate credit to make up the difference, California's Controller John Chiang warns that by the end of February, the nation's most populous state may not be able to pay some of its debts, and instead be reduced to issuing those creditors IOUs.

"My office has projected that, in approximately 60 days, there will be insufficient cash available to meet all expenditures reflected in the 2008-09 Budget Act," stated a Tuesday letter from Controller Chiang to the directors of all state agencies. "To ensure that the State can meet its obligations to schools, debt service, and others entitled to payment under the State Constitution, federal law, or court order. California may begin, as early as February 1, 2009, issuing registered warrants...commonly referred to as IOUs...to individuals and entities in lieu of regular payments."

California's registered Republicans should, in lieu of regular tax payments, be permitted to pay the state with "registered warrants" since they're not responsible for this disaster.