AutoExpress has the rundown on a new Mercedes Gullwing that just happens to be a 40mpg hybrid: it's reported to be the new SLK flagship and could outstrip the SL itself.

[the] SLK variant will use battery packs located in its side sills. Because the sills need to be high to accommodate the packs, designers hit on the idea of turning a potential flaw into a virtue, combining them with the roof-mounted doors to create a baby brother to the SLC. 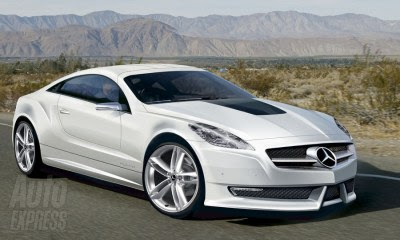 It’s likely the range-topping SLK will use the same advanced lithium-ion battery technology as the Blue Zero E-Cell concept which debuted at the Detroit Motor Show earlier this month. It has batteries that drive an electric motor, and the model can run for around 120 miles before needing to be recharged. 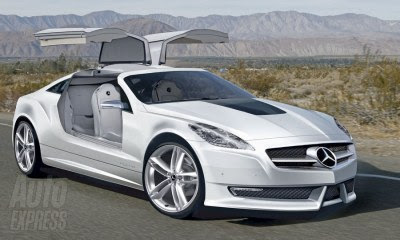 In the SLK, this combination will be teamed with a petrol engine, possibly a development of the 3.5-litre V6 used in the current car. With a brake-energy regeneration system – like the KERS set-up on this season’s Formula One cars – plus stop-start, the SLK Gullwing would be extremely efficient, with fuel economy of around 40mpg and CO2 emissions of 150g/km. 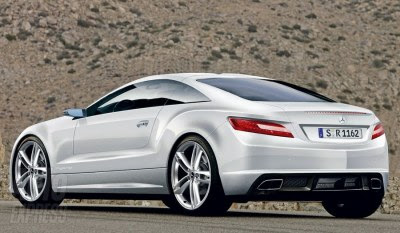 Performance will be superb, too. Combined with the V6 engine, the petrol-electric set-up would have as much torque as a regular V8. And with the electric motor assisting the engine under full throttle and up hills, owners could expect awesome acceleration, with 0-60mph in five seconds and a top speed of 155mph. Fine-tuning of the performance and handling is likely to be carried out by Mercedes’ AMG division.

Word is that it won't be ready until 2011. AutoExpress has all of the details.