Problem is that the nominee failed to pay his taxes despite being advised in writing by the IMF of his liability.

The 1998 IRS Restructuring and Reform Act lists "10 types of actions for which IRS employees of the agency can be fired." 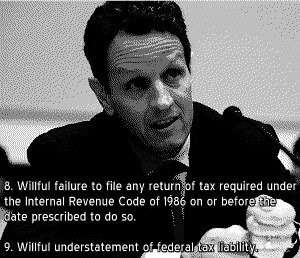 It would seem Timothy Geithner is held to a lower standard than even an entry-level IRS employee.

The 1998 IRS Restructuring and Reform Act lists 10 types of actions for which employees of the agency can be fired:

1. Willful failure to obtain the required approval signatures on documents authorizing the seizure of a taxpayer's home, personal belongings or business assets.

2. Providing a false statement under oath with respect to a material matter involving a taxpayer or taxpayer representative.

3. With respect to a taxpayer, taxpayer representative or other employee of the IRS, the violation of any right under the Constitution or federal laws such as the 1964 Civil Rights Act and the 1990 Americans W ith Disabilities Act.

4. Falsifying or destroying documents to conceal mistakes made by any employee with respect to a matter involving a taxpayer or taxpayer representative.

5. Assault or battery on a taxpayer, taxpayer representative or other employee of the IRS - but only if there is a criminal conviction, or a final judgment by a court in a civil case, with respect to the assault or battery.

6. Violations of the Internal Revenue Code of 1986, Treasury Department regulations or IRS policies for the purpose of retaliating against, or harassing, a taxpayer, taxpayer representative, or other employee of the IRS.

7. Willful misuse of the provisions of Section 6103 of the Internal Revenue Code of 1986 for the purpose of concealing information from a congressional inquiry.

8. Willful failure to file any return of tax required under the Internal Revenue Code of 1986 on or before the date prescribed to do so.

10. Threatening to audit a taxpayer for the purpose of extracting personal gain or benefit.

Gee, do you think there's a double standard, Senator Chris "HUD Statement" Dodd? How about you, Barney "Freddie's Fannie" Frank? Got an opinion, Sandy "Pants" Berger?

I get the sense that our beloved government officials are more royalty than representatives. That whirring sound you hear are the Framers spinning in their graves.