We are in deep, deep trouble. What other reaction might a citizen have when informed that President Obama's criticism of Rush Limbaugh is more severe than his words for Iran's genocidal Mullahs.

I've culled several interesting tidbits from the full transcript of President Obama's interview with Al Arabiya. Interestingly, the White House did not deign to reprint the entire transcript, choosing just a few paragraphs. My comments are italicized.

Q: You’ve been saying essentially that we should not look at these issues — like the Palestinian-Israeli track and separation from the border region — you’ve been talking about a kind of holistic approach to the region. Are we expecting a different paradigm in the sense that in the past one of the critiques — at least from the Arab side, the Muslim side — is that everything the Americans always tested with the Israelis, if it works. Now there is an Arab peace plan, there is a regional aspect to it. And you’ve indicated that. Would there be any shift, a paradigm shift?

THE PRESIDENT: Well, here’s what I think is important. Look at the proposal that was put forth by King Abdullah of Saudi Arabia... I might not agree with every aspect of the proposal, but it took great courage... to put forward something that is as significant as that. I think that there are ideas across the region of how we might pursue peace.

The Saudi intiative offers Israel Arab recognition in exchange for Israeli withdrawal from territory it occupied in the 1967 war, including the establishment of a Palestinian state with Jerusalem as its capital and a "just solution for the problem of Palestinian refugees." Consider that for every one acre of land Israel has, Arab nations have 510, begging the question: why do the Muslims even want this miniscule bit of desert?

THE PRESIDENT: ...we are looking at the region as a whole and communicating a message to the Arab world and the Muslim world, that we are ready to initiate a new partnership based on mutual respect and mutual interest, then I think that we can make significant progress... Now, Israel is a strong ally of the United States. They will not stop being a strong ally of the United States. And I will continue to believe that Israel’s security is paramount. But I also believe that there are Israelis who recognize that it is important to achieve peace. They will be willing to make sacrifices if the time is appropriate and if there is serious partnership on the other side.

Six decades of war just to survive isn't, apparently, enough of a sacrifice. Is there a word that means "naive", only multiplied by a million? 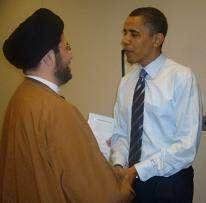 THE PRESIDENT: I think it is possible for us to see a Palestinian state — I’m not going to put a time frame on it — that is contiguous, that allows freedom of movement for its people, that allows for trade with other countries, that allows the creation of businesses and commerce so that people have a better life...

Which would mean opening Israel's tiny sliver of land to another wave of suicidal terrorists. Brilliant! Why didn't anyone think of that before?

THE PRESIDENT: Now, my job is to communicate the fact that the United States has a stake in the well-being of the Muslim world that the language we use has to be a language of respect. I have Muslim members of my family. I have lived in Muslim countries.

Countries? We knew about Indonesia, but do tell.

Q: Tell me, time is running out, any decision on from where you will be visiting the Muslim world?

And you’re going to see me following through with dealing with a drawdown of troops in Iraq, so that Iraqis can start taking more responsibility. And finally, I think you’ve already seen a commitment, in terms of closing Guantanamo, and making clear that even as we are decisive in going after terrorist organizations that would kill innocent civilians, that we’re going to do so on our terms, and we’re going to do so respecting the rule of law that I think makes America great.

What Obama describes is a return to lawfare -- the treatment of terrorist acts of war as law enforcement issues. It's almost as if 9/11 never happened. At least for Democrats, that is.

Q: President Bush framed the war on terror conceptually in a way that was very broad, “war on terror,” and used sometimes certain terminology that the many people — Islamic fascism. You’ve always framed it in a different way, specifically against one group called al Qaeda and their collaborators. And is this one way of – 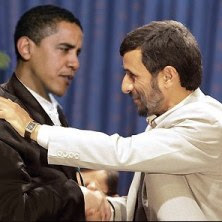 THE PRESIDENT: I think that you’re making a very important point. And that is that the language we use matters. And what we need to understand is, is that there are extremist organizations — whether Muslim or any other faith in the past — that will use faith as a justification for violence. We cannot paint with a broad brush a faith as a consequence of the violence that is done in that faith’s name.

He has a point. Whether it's nuns quietly passing SBDs in church, or Jewish dentists performing dental surgery with insufficent anasthesia, or even militant Quakers engaging in random cow-tipping, religious extremism in any form is completely unacceptable.

And so you will I think see our administration be very clear in distinguishing between organizations like al Qaeda — that espouse violence, espouse terror and act on it — and people who may disagree with my administration and certain actions, or may have a particular viewpoint in terms of how their countries should develop. We can have legitimate disagreements but still be respectful. I cannot respect terrorist organizations that would kill innocent civilians and we will hunt them down.

Because only those carrying laminated Al Qaeda Life Member cards can be targeted. We know that Hezbollah, Hamas, Al Qaeda-in-Iraq, Ansar al-Islam, Islamic Jihad, Abu Sayyaf, Jemaah Islamiyah, Fatah and Darul Islam have nothing to do with one another and can only be targeted with a complete police investigation after a crime has been committed.

Q: Will the United States ever live with a nuclear Iran? And if not, how far are you going in the direction of preventing it?

THE PRESIDENT: You know, I said during the campaign that it is very important for us to make sure that we are using all the tools of U.S. power, including diplomacy, in our relationship with Iran... Now, the Iranian people are a great people, and Persian civilization is a great civilization. Iran has acted in ways that’s not conducive to peace and prosperity in the region: their threats against Israel; their pursuit of a nuclear weapon which could potentially set off an arms race in the region that would make everybody less safe; their support of terrorist organizations in the past — none of these things have been helpful.

But I do think that it is important for us to be willing to talk to Iran, to express very clearly where our differences are, but where there are potential avenues for progress. And we will over the next several months be laying out our general framework and approach. And as I said during my inauguration speech, if countries like Iran are willing to unclench their fist, they will find an extended hand from us...

Diplomacy... not conducive to peace... pursuing nukes... setting off an arms race... supporting terrorists... all of that is "not helpful". So let's extend a hand.

Correction: is there a word that means "naive", only multiplied by ten trillion? Oh. Yeah. "Jimmy Carter".