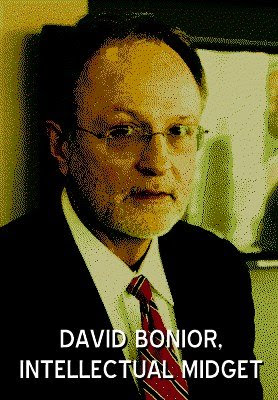 David Bonier* is a former Congressman from Michigan who is Barack Obama' chief economic adviser. Before the 2008 election, Bonier was best known for his controversial and well nigh treasonous trip to visit Saddam Hussein on the Iraqi intelligence service's expense account.

Put simply, Bonier is an ideological buffoon whose intelligence was overshadowed, for a time, by Anna Nicole Smith. Consider his support of "reparations payments" (apparently the 700,000 Union dead in the Civil War constituted only the down payment).

Or his repeated support of the Marriage Tax Penalty, which is statistically proven to increase single-parent families and crime.

And he staunchly opposes school vouchers despite demonstrated success around the country.

Bonior's genius was on display this morning on Meet the Press, wherein he spent his scant on-air seconds hawking the most ludicrous and ruinous strategies that today's Left has to offer using a breathless imitation of Billy Mays.

David Bonior: Well, from my perspective we’ve got to get a hold of this inequality we have in this country today on, on wages and income, and this Bush tax cut piece is a, is a big part of that. The top–over the last 20 years, the top 10 percent took 90 percent of the income gains in this–in the country. And the top 1 percent took roughly 60 percent. And the top 1/10th of 1 percent took 35 percent of that. I mean, it’s skewed the wrong way. And what we need to do is focus in on not only monetary policy and fiscal policy, as we have talked this morning, but we’ve also got to talk about where we want to end up.

Gee, I thought it was a good thing to have super-rich guys like, say, Bill Gates, who founded Microsoft. Microsoft employs roughly 100,000 people around the world, helped create millions of jobs, and whose efforts helped manufacture literally tens of thousands of millionaires. 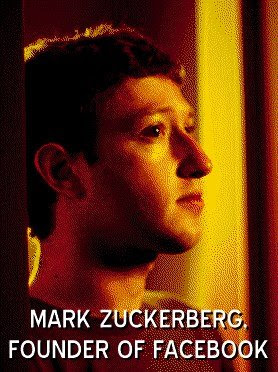 Say, Bonier, if you heavily tax all of those highly successful people, I wonder whether they'll still be able to invest in new ventures that might, for example, turn into the next mega-employer like Microsoft?

But that would require understanding a difficult concept called "Economic Mobility." It's a complicated subject, Bonier. It requires that you you understand America, where those at the bottom of the economic ladder can climb into the middle and often, the upper, classes with amazing rapidity. 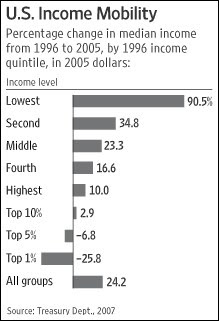 And it requires that you read a 2007 Treasury Department study, which shows income mobility in the U.S. works down as well as up; and that mobility over the last decade is more vibrant than ever.

But I suppose that's all to difficult for Bonier to understand. Just believe government can do it better, peons!

Like creating "green collar jobs" (whatever the hell those are) and other big government programs bound to be just as successful as Social Security, Medicare, Medicaid, "The War on Poverty", and the hundreds of other "progressive" programs that have left our children with $54 trillion in unfunded liabilities.

And that's before the Democrats socialize medicine.

Bonier is a blinkered ideologue -- with an extremely low IQ -- who uses meaningless "inequality" statistics as a means of reducing opportunity and increasing poverty.

Let's go back to the videotape:

REP. BONIOR: And the way we end up with helping actually people is to give them the chance to bargain collectively at the table. With 7 percent unionization in this country, you’re not going to get the dispersion that you need. We were successful in this country–after the second World War, the three most profitable decades for working people. Shared prosperity occurred after the second World War because unionization was at 35 percent. The Employee Free Choice Act is an important piece of legislation that President-elect Obama and Biden support, the Congress support, 60 percent of the American people support, and that will help share in the benefits and the bounties of the country.

I'm speechless. So, Bonier believes that the post-World War II economy thrived not because of Eisenhower's "Dynamic Conservatism" -- which emphasized reduced federal spending, balanced the budget, ended wage and price controls, and lowered farm subsidies -- but because of Union membership. 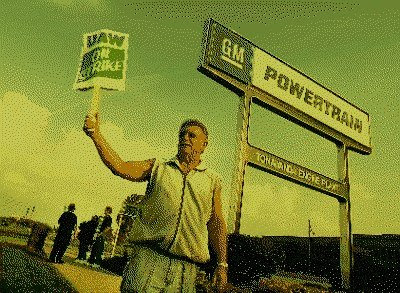 Yes, those would be the same Unions led by officials who've helped bankrupt the automobile companies. And have a troubling history of ties to organized crime. And have fought numerous successful efforts at implementing meritocracies (such as Charter Schools).

On the talk show circuit, Barack Obama demands "sacrifice from every American."

Sacrifice for everyone except government bureaucrats, that is.

Heaven forbid someone ask Government to downsize, to allow citizens to keep more of their earnings, or to incent investment. But those concepts are above David "Dumb-as-a-Rock" Bonier's pay-grade.

What a freak show.

* When pronouncing Bonier's name, the i is silent.
at 9:54 PM
Email ThisBlogThis!Share to TwitterShare to FacebookShare to Pinterest
Labels: Bonior, Democrats, Economy, Obama, Unions