Ruh roh: Al Sharpton goes to war with the unions


Someone pinch me: yesterday Al Sharpton was on the op-ed page of The Wall Street Journal. Praising No Child Left Behind (NCLB). And fighting the unions.

...we staunchly support NCLB's core concept that schools should be held accountable for boosting student performance. Dismissing the potential of schools to substantially boost minority achievement, as is now fashionable in some Democratic circles, is ultimately little more than a recipe for defeatism... ...we also support expanding parental choice. High-performing urban charter schools such as the KIPP (Knowledge Is Power Program) schools are showing that minority students can close the achievement gap if given access to high-quality instruction.

Of course, the powerful teachers' unions don't support charter schools for the obvious reason: accountability. Combining standardized testing (the gold standard for education at every level) with competition? That's bound to scare the bejeebers out of Union bosses everywhere.

Consider the proven results of charter schools thus far (PDF), despite the best efforts of the Union bosses to suppress competition: 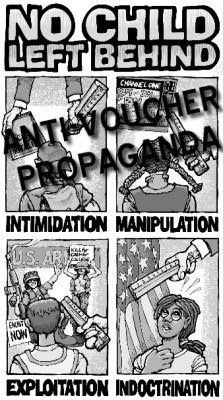 • In Charlotte, students gained about 6 percentile points in both math and reading after one year.12

• In Florida, public schools whose students are eligible for vouchers made gains 5 percentile points greater than schools not facing competition.13

• In Milwaukee, schools faced by voucher competition exhibited gains that were 3.4 percentile points greater than those made by schools not facing competition.14

• In Edgewood ISD in San Antonio, graduation rates have increased in six of seven years since the privately-funded HORIZON scholarship program began, rising from 60 percent to 75 percent since 1999.15