Your positive stock market news for the day


May I present the five-year stock chart of the New York Times Company? 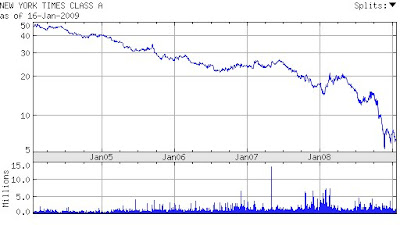 Google will kill a program to sell newspaper advertising because it is not making enough money... Google will shut the Print Ads program on Feb. 28, the company said on its blog on Tuesday afternoon. The two-year-old service was designed to help newspapers make money by enticing Google advertisers to expand into print newspaper sales... 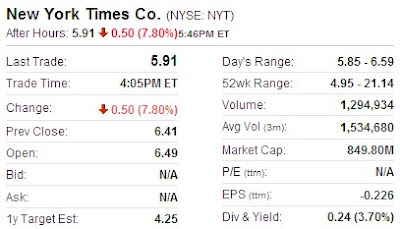 Carlos Slim Helu, who has ridden to the rescue of the New York Times with a $250m loan this week, professed to know little about the closest thing America has to a newspaper of record just six months ago.

‘Do you know the New York Times?’ the world’s second-richest man asked one visitor in July. ‘Do you know this guy [Arthur] Sulzberger and some woman called Janet [Robinson, chief executive]? What do you think?’”

To put things into perspective, this is the only guy the Times could recruit who even might invest in the failing enterprise.

Will Ms. Dowd please turn off the lights when she leaves the building?