Russian scientists are amassing evidence that the Earth is entering another Ice Age. 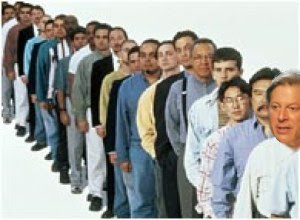 The earth is now on the brink of entering another Ice Age, according to a large and compelling body of evidence from within the field of climate science. Many sources of data which provide our knowledge base of long-term climate change indicate that the warm, twelve thousand year-long Holocene period will rather soon be coming to an end, and then the Earth will return to Ice Age conditions for the next 100,000 years...

...Ice cores, ocean sediment cores, the geologic record, and studies of ancient plant and animal populations all demonstrate a regular cyclic pattern of Ice Age glacial maximums which each last about 100,000 years, separated by intervening warm interglacials, each lasting about 12,000 years.

...Since the late 1970s, the Milankovich [cycles have] remained the predominant theory to account for Ice Age causation among climate scientists...

What the hell is Al Gore going to do with himself now?

This climate business is making him look like even more of a buffoon than when he embarrassed himself repeatedly in the political arena (Buddhist Temple much?). Wasn't it just a few days ago that he claimed the polar icecaps would be gone in five years?