The SS Titanic of Stimulus Packages

The inventory of items in the Obama stimulus package is truly shocking.

The 647-page, $825 billion list of boondoggles is a blistering slap in the face to the American taxpayer.

The Wall Street Journal called it four decades of pent-up Democratic demands and concludes, "[w]e've looked it over, and even we can't quite believe it."

The litany of lunacy includes the following gems:

• $83 billion in welfare payments (the earned income credit for people who don't pay income tax)
• $81 billion for Medicaid
• $66 billion on "education", more than the entire Department of Education required just ten years ago
• $36 billion for expanded unemployment benefits
• $20 billion for food stamps
• $8 billion on "renewable energy" projects, which have a low or negative return
• $7 billion for "modernizing federal buildings and facilities"
• $6 billion on urban transit systems, dominated by unions and which, almost universally, lose money
• $2.4 billion for "carbon-capture demonstration projects"
• $2 billion for child-care subsidies
• $1 billion for Amtrak, the federal railroad that's run in the red for 40 years
• $650 million for "digital TV conversion coupons" (on top of billions already spent)
• $600 million on new cars for government (added to the $3 billion already spent each year)
• $400 million for "global-warming research"
• $50 million for the National Endowment for the Arts 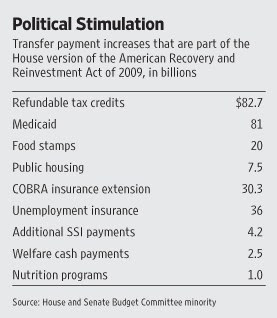 Quid pro quo tributes are paid throughout the document to various unions. On page 257, for exmple, it states that "No recipient . . . shall use such funds to provide financial assistance to students to attend private elementary or secondary schools." Put simply: no non-union teachers need apply.

This list is many things (a pile of manure strikes us as one possible description), but "stimulus" ain't one of them.

Some of these social programs will, like the ill-fated Social Security and Medicare debacles, will be impossible to remove until its too late.

Congressional Republicans suggested two simple tax cuts for the lowest brackets: cut the 10% bracket to 5%. Cut the 15% bracket to 10%. They were turned down.

Obama calls the package a "jolt to the economy." That's one of the few statements he's made with which I completely agree.

Democrats own this cluster****: lock, stock and barrel.