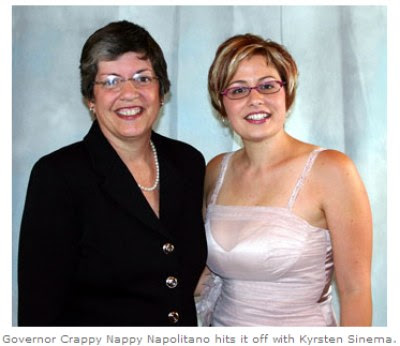 For $100 dollars, answer the following question: when asked about the border fence, who said "Show me a 50-foot wall and I'll show you a 51-foot ladder"?

That would be the ostensible Secretary of Homeland Security, Janet Napolitano.

In 2005, she pilloried the idea of a border fence, stating "it would be too expensive, take too long to construct, and be ineffective once completed."

That was, of course, before 500 miles of fence were completed with noteworthy success.

Accuracy in Media has reported a variety of troubling aspects related to her record:

The reality is that, when it comes to illegal immigration, Napolitano has been all over the place. Parts of her record as governor of Arizona were abysmal. In 2006 and 2007, she was a vocal supporter of the failed federal mass-amnesty bills. Napolitano has opposed the building of border fence. She vetoed legislation that would have ended the ability of illegals to pay lower in-state tuition rates at Arizona public colleges and universities. In 2004, she failed in her attempt to defeat a 2004 ballot initiative to deny most non-essential services and benefits to illegals...

After voters ignored Napolitano and overwhelmingly approved the measure, she tried to neuter its effect by limiting it to five relatively small benefit programs. Napolitano also fought implementation of the federal Real ID Act, the 2005 bill requiring states to make their driver’s licenses and other state-issued identity documents more secure and make certain that illegal aliens cannot obtain them. (This was done to prevent a recurrence of the situation in which September 11th hijackers who were illegal aliens carried driver’s licenses and other forms of state-issued ID.) In June of this year, Napolitano signed into law legislation barring Arizona from complying with Real ID.

I can't believe what Janet Napalitano said that the procedure was "successful" for security offensive tactics on zero tolerance threat policy on U.S. soil even the border and flight entrance to U.S. I suggest or wish President O'Bama would fire Mrs. Napalitano from her job for poor performance to beef up a tighter security policy before all American citizens will be killed by Radical S.O.B. thugs who will be using bombmaking tactics. Fire her or we'll all be killed or perished whatsoever before it's too late. Huh...