The Foreign Intelligence Surveillance Court of Review — a special federal appeals court created by the 1978 FISA statute on matters of national security surveillance -- last week ruled that the President has unfettered constitutional authority to monitor international communications without court permission. In fact, the President can do so even when the communications of U.S. citizens are involved. 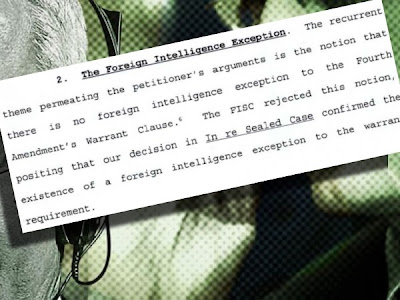 It understates the case to say the Bush administration has been slandered for asserting this power — accused of shredding the Constitution and violating the principle that no one is above the law (even as Congress put itself above the law — the Constitution — by enacting and trying to enforce a statute, FISA, that sought to diminish the president's constitutional authority). It was never true.

President Bush's Terrorist Surveillance Program — carried out by the NSA without court oversight, just as wartime presidents have always conducted national security surveillance without court oversight — always stood on strong authority, including a 2002 ruling from the same Foreign Intelligence Court of Review.  have argued in favor of the program's legality, here on NRO and elsewhere, more times than I can count.  (See, e.g., here, here, here, here and here).

But during last week's Senate Judiciary Committee hearing, Holder was as slippery as a FALN bomb-maker's can of machine oil.

Mr. Hatch: "Back to my prior point, the President's inherent authority under the Constitution. Can that be limited by a statute? You're relying on a statute as though that's binding on Article II of the Constitution." 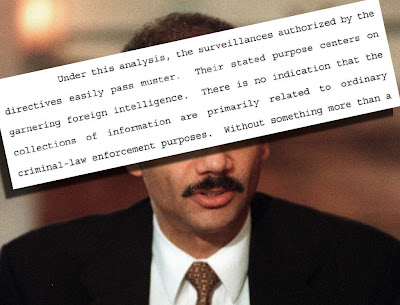 Mr. Holder: "Well, the President obviously has powers under the Constitution that cannot be infringed by the legislative branch. That's what I was saying earlier. There are powers that the President has delegated to him -- that he has -- and Congress does not have the ability to say, with regard to those powers, you cannot exercise them. There's always a tension in trying to decide where that balance is struck. And I think we see the best result when we see Congress interacting with the President, the executive branch interacting with the legislative branch and coming up with solutions . . ."

Mr. Hatch: "That still doesn't negate the fact that the President may have inherent powers under Article II that even a statute cannot vary."
...
Holder: "Yeah. There are certain things that a President has the constitutional right, authority to do, that the legislative branch cannot impinge upon."

Put simply, even Holder now admits that Presidents have constitutional powers that the legislature may not abridge.

So much for the shrill meme endlessly marketed by Democrats and echoed by their public relations arm, the mainstream media. To wit:

Bush is not above the law: New York Times Op-Ed (James Bamford):

...the president of the United States broke the law, committed a serious felony and violated the Constitution... Under his program, President Bush could probably be charged with wiretapping not 17 but thousands of people without having obtained a court order authorizing the taps as required by federal law, in violation of FISA...

In a hearing on Jan. 18 [2007], the chairman of the Senate Judiciary Committee, Patrick Leahy of Vermont, said, “For years, this administration has engaged in warrantless wiretapping of Americans contrary to the law... ”

His view was shared by the Senate Intelligence Committee chairman, Jay Rockefeller of West Virginia, who said of Mr. Bush, “For five years he has been operating an illegal program.”

New Rule: Liberals must stop saying President Bush hasn’t asked Americans to sacrifice for the war on terror. On the contrary, he’s asked us to sacrifice something enormous: our civil rights... ...this administration has read your phone records, credit card statements, mail, Internet logs.. I mail myself a copy of the Constitution every morning just on the hope they’ll open it and see what it says.

Or Keith Olbermann, a man so unhinged even the left mocks him:

Olbermann's Special Comment on FISA: President Bush Is a Liar and a Fascist: If you believe in the seamless mutuality of government and big business — come out and say it! There is a dictionary definition, one word that describes that toxic blend. You’re a fascist — get them to print you a t-shirt with “fascist” on it! What else is this but fascism? ...And if there’s one thing we know about Big Brother, Mr. Bush, is that he is — you are — a liar... 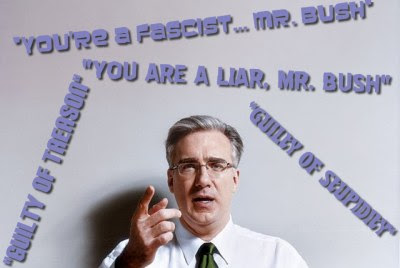 Or Elaine Cassel, author of The War on Civil Liberties (How Bush and Ashcroft Have Dismantled the Bill of Rights).

I felt compelled to share the story of how... the government was using the war on terrorism to circumvent precious liberties and rights guaranteed by the Bill of Rights... [we can not] sit by and watch our freedoms dissolve under the guise of fighting terrorism.

Or the brilliant diarists at Daily Kos:

I pray that George W. Bush burns in Hell!: I sit here and am depressed what we have become and the destroyed lives all because this pathetic man chose to defy our constitution... our people and our sense of moral decency. This horrible man will burn in hell. That would only be fair.

* * *
Now that Chimpy has been forever vindicated by the FISA review court -- and the presumptive Democratic Attorney General -- we'll patiently await apologies from the spectrum of unhappy Leftists and terror-supporters who range from the merely ignorantly to the patently deranged.

It's a great Festival, and you are fully deserved of being there with you're ambitious and talented. And..anyhow, I hope we'll have more CONS in Orlando...It's fun! Texas