Eh, Panetta doesn't even have a daughter!


I've seen some intriguing reports regarding President Obama's choice for Director of Central Intelligence (DCI), Leon Panetta. A wide variety of sources reported that Panetta's daughter is a left-wing activist who pals around with South American thugs like Hugo Chavez.
In the interest of intellectual honesty, I'd like to call attention to AIM's Cliff Kincaid, who reports that Panetta does not have a daughter. 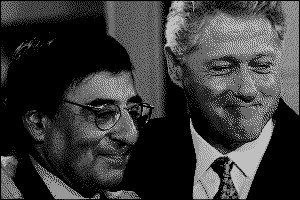 ...Linda Panetta [was identified] as “an avowed Marxist, anti-American, anti-military leftist” and said that Leon Panetta would have to explain his daughter’s activities.

But reached by telephone in Philadelphia, Linda Panetta told Accuracy in Media that while she admires Leon Panetta and that there may be a distant family connection somewhere, he is not her father and that she has never even met him. “Not only am I not his daughter but unfortunately I have not had the pleasure of meeting this man who has done amazing work in his lifetime,” she said. “He and my father may have been second cousins,” she acknowledged, but under no circumstances is he her father.

Despite charges or information to the contrary, she has never claimed to be his daughter. She explained, “God rest my Dad’s soul. He was an incredible individual as well. I would never in my lifetime claim to be anybody’s daughter but my father’s.”

Official biographies of Panetta say that he has three sons but no daughter.

Let this be a teaching moment for the left-wing bloggers.

This is what we call "intellectual honesty." It acknowledges factual evidence and historical detail. It rejects falsehoods and baseless conjecture.

And this is precisely why Keith "Bathtub Boy" Olbermann could never, ever, ever be a conservative.
at 9:12 PM
Email ThisBlogThis!Share to TwitterShare to FacebookShare to Pinterest
Labels: Democrats, Obama