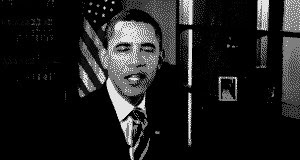 Organizing for America, the new group, will be a tool to press for policy. It reportedly will have an annual budget of $75 million, making it an unprecedented standing political army for a president...

Telling millions of campaign supporters that "what you built can't stop now," President-elect Barack Obama on Saturday took his first public steps toward transforming his massive grass-roots political machinery into an unprecedented national network to help pass his policy agenda...

...Obama said Organizing for America, the new network, would be used as a tool to press for policies on major issues, including the healthcare system, the Iraq war and the development of new energy sources. He also said the effort would be housed in a distinctly partisan place: the Democratic National Committee...

Put simply, the organization will be a non-stop reelection campaign designed to market his allies in 2010 and threaten those who oppose him.

Cut to rule #10 in Saul Alinsky's Rules for Radicals:

"10. The major premise for tactics is the development of operations that will maintain a constant pressure upon the opposition. It is this unceasing pressure that results in the reactions from the opposition that are essential for the success of the campaign."

For those unfamiliar with Saul Alinsky (1909-1972), he is considered the 'father of modern American radicalism.' He developed strategies and tactics designed to transform grassroots community organizing into mechanisms to overthrow governments and institute Communism. 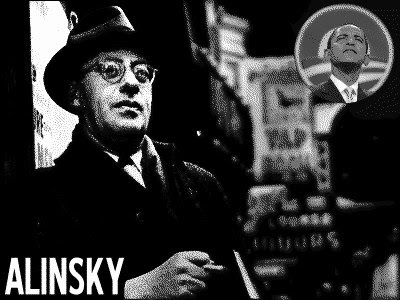 Barack Obama's training in Chicago by the great community organizers is showing its effectiveness. It is an amazingly powerful format, and the method of my late father always works to get the message out and get the supporters on board... it is a powerful strategy for initiating change and making it really happen. Obama learned his lesson well.

I am proud to see that my father's model for organizing is being applied successfully beyond local community organizing to affect the Democratic campaign in 2008. It is a fine tribute to Saul Alinsky as we approach his 100th birthday.

The key quote from Alinsky's book describe his ultimate goal.

In this book we are concerned with how to create mass organizations to seize power and give it to the people; to realize the democratic dream of equality, justice, peace.... This means revolution...

A Marxist begins with his prime truth that all evils are caused by the exploitation of the proletariat by the capitalists. From this he logically proceeds to the revolution to end capitalism, then into the third stage of reorganization into a new social order of the dictatorship of the proletariat, and finally the last stage -- the political paradise of communism.