Below you'll find a helpful chart and timeline explaining Michelle Obama's ultra-critical position at the University of Chicago Hospital (UCH), a position coincidentally created just after her husband's election to the Senate... and dissolved just minutes after she resigned to move into the White House. 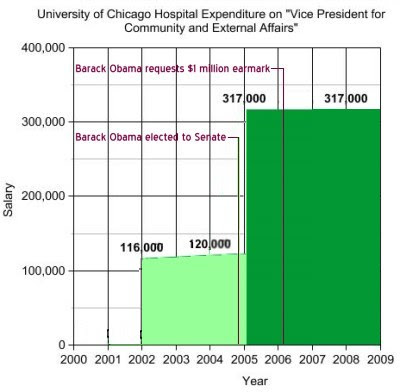 In January of 2005, Barack Obama was sworn in as a United States Senator.

In February of 2006, Barack Obama requested a $1 million earmark for a new hospital pavilion at the University of Chicago.

Effective 14 January 2009, Michelle Obama's VP position was eliminated, its functions absorbed into another executive's position. This prompted writer Don Rose to ask "[If] that work can be folded into another guy’s, why was it separate in the first place?"

Excellent question. Some roguish wags might speculate that a quid pro quo arrangement was in effect; pay-to-play as it were. But that seems highly unlikely given Barack Obama's high ethical standards *.