The Associated Press continued its marketing campaign for carbon trading this morning. Amidst a record-setting cold snap, a distinct non-rise in sea levels, and incessant growth in the polar ice caps, the AP relayed news that 2008 was among the ten warmest years ever. 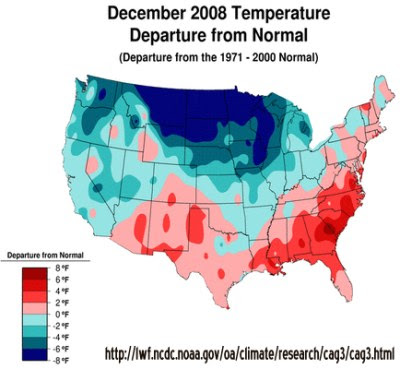 Preliminary calculations show the world's average temperature for 2008 was 0.88 degree Fahrenheit above the 20th Century average of 57.0 degrees F.

The ranking means that all of the 10 warmest years on record have occurred since 1997.

Odd. Time Magazine reported that 2008 was one of the coldest years on record.

The World Meteorological Organization (WMO) on Tuesday released its weather analysis for the year and found that 2008 has been the coolest year since the turn of the century. Using data gathered from Britain's Hadley Centre, the University of East Anglia and the U.S. National Oceanic and Atmospheric Association (NOAA), the WMO reported that the average global temperature in 2008 was 57.74 degrees F (14.3 degrees C), cooler than the past several years.

And initial reports that 2007 was the warmest year on record turned out to be completely false.

An error in RSS data has been identified by John Christy and Roy Spencer, competitors from UAH...... 2007 remains the coldest year of the century according to HadCRUT3 weather stations...

One month ago, we noticed that November 2007 was the coldest month since January 2000. Well, the RSS MSU satellite data prepared by remss.com show that December was even cooler.

And in the U.S., January 2009 is likely to prove among the coldest months in recorded history.

So who would benefit from false data-sets and incessant Billy Mays-style marketing of global warming? That would be Al Gore, the UN's IPCC and Barack Obama's "global warming czar", all of whom have businesses that will allow them to personally profit from carbon trading.

When the World Rainforest Movement and other hard-core environmentalists call cap-and-trade "fraudulent" and "a scam", I think it's safe to say that carbon offsets are a loopy delusion suitable only for a bad science fiction movie.

Related: "Mark your time, hu-mans" and "Al Gore, Laughingstock."
at 9:03 AM
Email ThisBlogThis!Share to TwitterShare to FacebookShare to Pinterest
Labels: Climate, Democrats, Gore