Laughingstock Al Gore dumbfounded as he tries to explain record-breaking cold around the U.S. Can you detect the pattern?

• The windchill in Massena, NY hit 33 below zero.

• Maine residents braced for nighttime readings down to 40 below zero.

• In Tallahasee, Florida, temperatures will hit the mid-20's, the lowest since 1977.

• Chicago saw a record ninth consecutive day of snowfall with a high of three below.

• In Jackson County, Alabama, lows will hit a record low tonight of zero.

• Columbia, Missouri will see the coldest temperaturs in 23 years.

• In Iowa, residents were warned that temperatures could drop as far as 27 below zero, matching the record set in 1972.

• Mt. Washington, New Hampshire air temperatures will hit 35 below with windchills reaching 75 to 80 below. That's a little shy of the record, set in 2004.

• Much of Wisconsin is experiencing near record cold, with 40 below windchills anticipated.

• And Europe is experiencing "the worst cold snap in decades."

• And in Pollock, S.D., the temperature has dropped to a record-setting 47 below zero. A gas station worker said it actually "hurts to breathe." 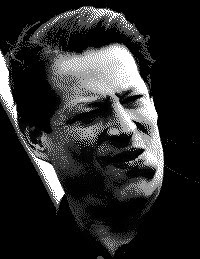 His sojourn was relatively brief. In three semesters, he enrolled in eight classes. He received an “F” as his grade in five of those classes. So, having failed out of school, he entered the family business, which was politics. But he apparently never lost his desire to enter a ministry, and since he couldn’t make the grade in the conventional sense, he did the next best thing. He started his own religion.

The result was the Church of Global Warming. With Gore as its high priest, the church was not long in establishing tenets of faith, nor in immediately branding those who refused to worship there as apostate.

[However] Sunspot activity, it appears, is on the wane, and the result has been a gradual cooling of Earth’s climate. Indeed, 2008 may be the first “coldest year” of the 21st century...

And Obama's "Global Warming" Czar -- a socialist who serves as a director for a company linked to carbon trading -- will likely try to proffer the deranged leftist strategy that the record cold is due to global warming.