Fabius Maximus: "We now have more people employed in government than manufacturing and construction." 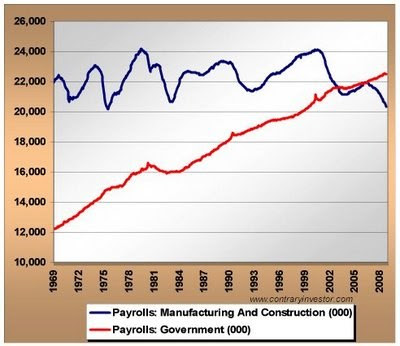 The Christian Science Monitor, no friend of the GOP, calls the Obama stimulus plan "A safety net for government jobs":

In Washington this week, President-elect Obama called on Congress to create 3 million jobs over the next two years – “more than 80 percent of them in the private sector.” 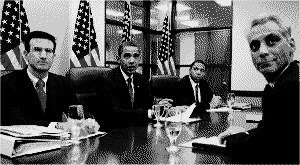 Republicans on Capitol Hill did a little quick math: That means 20 percent, or some 600,000 new jobs, will be in the public sector. That would boost the ranks of federal employees by a third, they said, none too pleased about the prospect of a “big government” revival.

“The federal government is bloated, inefficient, and spends too much of your hard-earned money,” said Rep. Steve King (R) of Iowa, in a statement. Some 600,000 new government jobs “will only add to the waste, fraud, and abuse coming out of Washington, D.C., and fail to provide a true economic stimulus.”

But that calculus leaves out a key phrase that Obama transition officials insist is part of the president-elect’s plan: to create “or save” 3 million jobs. “The vast majority of government jobs will be state and local jobs being saved,” said one official, speaking on background...

...The high-profile role of public-employee unions in the lobbying over this bill is troubling for some Republicans, who see the unions as key players in GOP defeats in the 2008 election. They see a boost for public-sector jobs as a boost, too, for partisan unions.