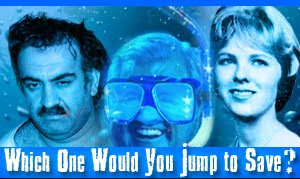 Waterboarding is a barbaric practice in which water is poured down the mouth and nose of a detainee, to simulate drowning. It's an ancient technique of tyrants. The prisoner is bound to an inclined board, feet raised and head slightly below the feet. Cellophane is wrapped over the prisoner's face and water is poured over him. Unavoidably, the gag reflex kicks in, and a terrifying fear of drowning leads to an almost instant plea to bring the treatment to a halt. If it goes wrong, it can lead straight to terminal hypoxia. When done right, it is controlled death.

Well, if there are experts at drownings, you've got to figure that Ted Kennedy is one of them.

Illustration: EIB
at 9:54 AM
Email ThisBlogThis!Share to TwitterShare to FacebookShare to Pinterest
Labels: Democrats, Kennedy, War