The bizarre ties between the Clintons, Vin Gupta and InfoUSA


Gateway Pundit has the essential introduction to the Clinton machine's ties to a single, powerful company in the data-mining industry. After some additional research, the many intricate links between the Clintons and InfoUSA deserve further attention. 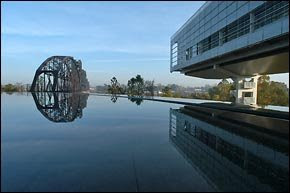 That’s one of the things the library really stands for. It physically stands for openness with all the glass and the light. But he wants it to be a place where people come and really study. And everything’s going to be available.

In reality, the Clinton "Public" Library will not disclose millions of documents relating to Hillary's activities during her husband's administration until after the 2008 election. 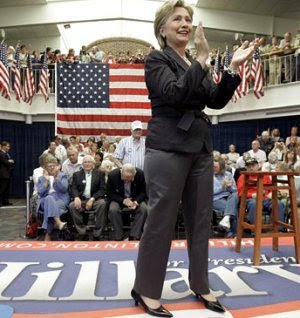 The Secret Donor List
In September, ABC reported that the list of donors to the Clinton Library remains secret:

Former president Bill Clinton said Thursday that he will not reveal the names of donors to the Clinton Presidential Library unless he is required to by law... the issue of contributions to the Clinton library has gotten fresh attention [with the scandal concerning] disgraced Clinton fund-raiser Norman Hsu. Hsu has given widely to the Clintons and their causes; he raised $850,000 for Sen. Clinton’s campaign, and gave $30,000 to the Clinton Global Initiative... Those contributions have been returned. But Clinton aides have declined to say whether Hsu has given any money to the foundation that funds the Clinton Presidential Library, or whether such funds have been returned...

...[The Clinton Library has received] $165 million from private sources, according to press accounts. None of those sources must be revealed, under state and federal law... Among the entities who have been reported to have given more than $1 million toward the presidentical center: the governments of Dubai, Kuwait, and Qatar; the Saudi royal family; a deputy prime minister of Lebanon; filmmakers Steven Spielberg, Stephen Bing, and David Geffen; Wal-Mart and Wal-Mart heir Alice Walton; the Anheuser-Busch Foundation; and Vin Gupta, chairman and CEO of infoUSA Inc., a telemarketing firm that has come under scrutiny for its handling of private information...

The Clintons' relationship with the Emir of Dubai has received significant attention over the last 18 months but there has been virtually no disclosure of the full extent of the Emirate's ties to both Clintons. In Gupta's case, various legal actions are beginning to expose the true depth of the relationship between InfoUSA and the Clintons. 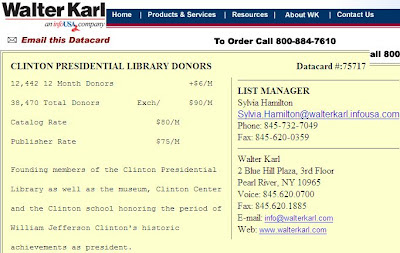 The Clintons Sell the Secret Donor List
While the Clintons have withheld the donor list from public scrutiny, they appear to have sold it to Vin Gupta's InfoUSA.

Three years after the William J. Clinton Presidential Library opened its doors, the list of donors who helped the former president build his $165 million complex remains a secret from the public... Yet the Blotter on ABCNews.com has learned that the Clinton Foundation sold portions of the list through a data company headed by a longtime friend and donor.

"The fact that they've sold the list and then turned around and said that these names must be kept anonymous completely undercuts their argument," said Sheila Krumholz of the Center for Responsive Politics, a Washington, D.C.-based government watchdog group that tracks the influence of money in politics.

An employee of Walter Karl, a subsidiary of the data company InfoUSA, told ABCNews.com that the company made a list of more than 38,000 donors to the Clinton presidential library available for sale...

In other words, the Clintons are happy to disclose the Library's donor list to insiders... but not the American public. But the public deserves to know how a current Presidential candidate might be influenced by tens of millions in donations to her husband's foundation. ...according to Miller's 2005 court filing, an investigator recognized a mailing as "part of a scheme to create a list of consumers who would be good targets for subsequent telemarketing fraud..."

As we shall see, the controversy involved other key Democrats whose families have been compensated by Gupta and/or InfoUSA. Many observers believe there is a conflict-of-interest, since Congress is considering additional regulations for companies like Walter Karl.

You may have read about the $146,886 jet trip a prominent CEO bankrolled for the Clintons to vacation in Acapulco, but this trip is just one of the favors the Clintons received from a company that makes millions selling the kind of personal data that's coveted by political campaigns...

The Clintons were also given use of InfoUSA’s corporate jet to take trips to Switzerland, Hawaii, Mexico and Jamaica at an estimated cost of $900,000. When Hillary used the jet for campaign purposes she only reimbursed the company at the cost of a first class flight. Her reimbursements, for seven of these trips, totaled $450,000—a significant discount from private jet fare costs.

...InfoUSA also paid Mr. Clinton $200,000 to deliver a speech in Omaha, Nebraska, where the company is headquartered, on July 27, 2001. Hillary’s disclosure forms also report that Mr. Clinton is paid an undisclosed fee of “more than $1,000” annually in “non-employee compensation.”

Recently, Cardinal Value Equity Partners, InfoUSA’s largest shareholder filed a lawsuit against [Gupta] for recklessly spending company money. Among other things, the shareholders were outraged about the company money had been spent on the Clintons... 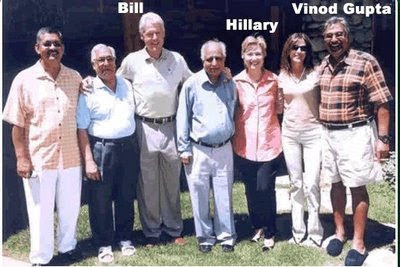 Shareholders rebel against Gupta's favors for the Clintons and other Democrats
In July, the New York Times called attention to the intricate ties between Gupta and the Democrat Party apparatus:

Mr. Gupta signed Mr. Clinton as a consultant after he left office. Over the years, he appointed Mr. Kerrey, Mr. Pressler, Mr. McAuliffe and Senator Ben Nelson, a Nebraska Democrat, to the boards of his companies, and gave jobs to Mr. Kerrey’s brother, William, and Ms. Pelosi’s son, Paul...

...Such expenditures caught the attention of fund managers who had invested in infoUSA. The funds filed a lawsuit last year accusing Mr. Gupta of wasting millions of dollars on the payments to Mr. Clinton, as well as houses, cars and a yacht for himself and corporate-jet flights for the Clintons and Mr. McAuliffe. Mr. Gupta denies misspending company money.

The funds have also questioned Mr. Gupta’s decision to pay a substantial premium last December to acquire the Opinion Research Corporation, which has done opinion surveys for CNN since April 2006. In January, CNN began using Opinion Research for its presidential polling, leading conservative bloggers to ask if Mr. Gupta, as a Clinton supporter, should have influence over CNN’s polling...

The job for Pelosi's son was especially controversial. The job was described as a $180,000-a-year "Vice President for Strategic Planning" that allowed Paul Jr. to keep his full-time job as a loan officer for Countrywide (California) and does not require him to work at InfoUSA headquarters in Omaha, Nebraska. 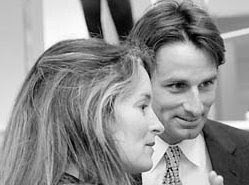 InfoUSA is the same company that has been cited by the New York Times for creating marketing lists that were used by con artists to fleece vulnerable elderly people. The lists had provocative names and offered the names of elderly people with cancer, elderly people with Alzheimer's and gamblers over 55 years of age who think their luck will change. After purchasing the lists, the con artists would call and convince the elderly person that they had actually ordered an expensive item. Once they received the victim's financial information, they often emptied their bank accounts, leaving many people penniless. Some of InfoUSA's internal e-mails suggest that company employees were aware that several of the companies they sold the lists to were under investigation...

it is likely that Congress will eventually address privacy issues involved with the selling of data that InfoUSA sells. Pelosi would be directly involved in that legislation, and her son should not be involved with the company in any way... [InfoUSA's payments] to Pelosi's son can only be viewed as an investment and should be stopped. 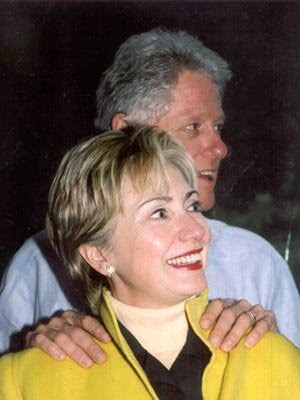 The Securities and Exchange Commission has opened an investigation into spending by a database marketer in Omaha that already faces a lawsuit contending that the company misspent millions, some of it on Bill and Hillary Rodham Clinton.

The shareholder lawsuit contends that Vin Gupta, founder of the company, InfoUSA, used private corporate jets to fly the Clintons on business, personal and campaign trips; that Mr. Gupta gave Bill Clinton a $3.3 million consulting contract; and that the company paid for luxuries that Mr. Gupta enjoyed... The lawsuit states that Info USA has spent nearly $900,000 since 2001 flying the Clintons to domestic and international destinations and political events.

Opinion Research Corporation, CNN, and the Clintons
In 2006, just three months before the elections that put Democrats in power by a narrow margin, InfoUSA purchased Opinion Research.

Despite the drop in violence in Iraq, only one quarter of Americans believes the U.S. is winning the war. There has been virtually no change in the past month in the number of Americans who believe that things are going badly for the U.S. in the war in Iraq... The public also opposes U.S. military action against Iran. Sixty-three percent oppose air strikes on Iran, while 73 percent oppose using ground troops as well as air strikes in that country... Overall, 56 percent, of Americans are dissatisfied with progress in the war on terrorism.

These results are counter-intuitive at best and completely false at worst. Were they the result of push-polling or misleading questions?

In my opinion, every single poll produced by CNN and/or Opinion Research Corporation should be utterly and completely ignored because of the bizarre and unexplained ties between InfoUSA and the Clintons. 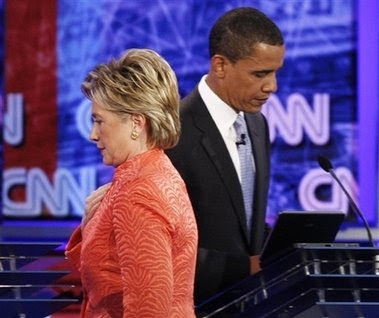 * Why would you and your husband sell the Clinton Library Donor List to InfoUSA but not disclose the list to the public?

* Will you describe all of your family's financial ties to Vinod Gupta and InfoUSA, such as your husband's true compensation?

* Should we trust any poll coming from CNN/Opinion Research Corporation given various financial ties -- not all of which have been disclosed -- between Vinod Gupta and your family as well as other key Democrats?

I won't hold my breath waiting for the mainstream media (especially CNN) to ask these questions. But perhaps one day during a debate, some real -- not scripted -- questioners will ask the tough questions that can and must be asked.

Update: In June, 2005, Walter Karl offered for sale the 720,000 names of registrants with Rock the Vote. I wonder how many of the mostly young registrants (e.g., MTV viewers) understood that their names would be hawked by the Democratic-linked InfoUSA subsidiary when they signed up?

Update II Big Lizards has "More on the Clintonian Culture of Corruption".

Update IV: Linked by the incomparable Anchoress - Thanks!
at 5:58 PM
Email ThisBlogThis!Share to TwitterShare to FacebookShare to Pinterest
Labels: Crime, Democrats, Hillary, Pelosi