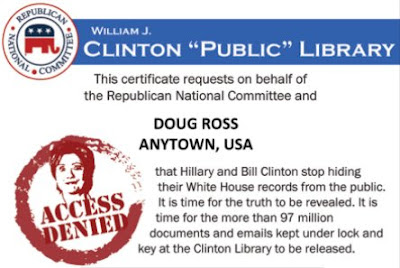 In fact, the Clinton "Public" Library is anything but. The Los Angeles Times ("Clinton secrecy III: More documents hidden through election") puts it bluntly:

An intriguing trove of documents that could open a revealing window into Hillary Clinton and her claims of vast White House experience qualifying her for the presidency is stored at the University of Arkansas library system in Fayetteville...

...The subject even came up near the end of the recent Democratic debate. Tim Russert asked her point blank if she would order the documents released, and she replied it's not her decision to make. Then, who's is it?

The Chicago Tribune ("Clinton library a closed book") recently called attention to the unique situation of a First Lady shielding her records from the public.

Almost three years after the library's opening and nearly two years after the administration's archives became subject to federal open-records laws, only a small fraction of the archives has been opened to the public.

Virtually all of the 3 million pages of documents that detail the internal workings of the health-care task force that Hillary Clinton headed remain stored away in boxes, for example.

Although lengthy delays in releasing White House papers are typical, the presidential candidacy of a former first lady presents an unprecedented circumstance. Processing by government archivists is partly responsible for the slow pace. But critics note that Bill Clinton could lift restrictions that keep many controversial records out of the public eye until 2013, and he could speed up release of records by waiving a review by his personal representative...

Get your own Clinton Library Card. Just don't try to charge the groceries on it.