Do it (donate) for the children


The root-system connecting database marketer InfoUSA, its founder Vin Gupta, and the Clinton clan gets more exposed by the day. Yeoman's work by A Jacksonian offers essential background reading on the foul-smelling mess.

Among the revelations, a host of Clinton donors named Gupta still wearing diapers:

...the number of student contributions of $1,000 or more quadrupled between 1990 and 1996. Take 8-year-old Jason Corcoran -- a high roller barely out of his highchair -- who plunked down $1,000 for a seat at a Clinton fund-raising luncheon in October 1995. Or 10-year-old Emily Gartner, a ponytailed influence peddler who ponied up $250 for the president. Or 11-year-old Alexander Gupta, whose largesse keeps both Clinton and Nebraska Gov. Ben Nelson crammed in the hip pocket of his Toughskins...

...Alexander Gupta's brothers Ben and Jess are also frequent campaign contributors, although not so frequent as their father Vinod, who gave $53,000 in the last election cycle, including a $40,000 gift to the Democratic Senatorial Campaign Committee. Little Emily Gartner's story is similar. She, brother Jeremy, sister Jennie and mom Sandra all gave $250 apiece on the same day that her father, Vermont businessman Allen Gartner, gave $1,000 to the Clinton campaign. 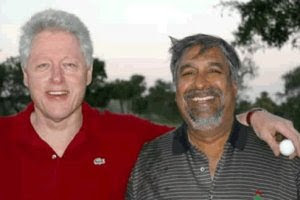 So what we have here is a form of kiddie money-laundering. Is it legal? Not if the money doesn't actually belong to the kids or if it wasn't their decision to contribute it.

...The eldest Gupta brother, 17-year-old Jess, told a reporter last year, "Truthfully, I'm not really associated with the donations. I'm not involved in a big way. Dad makes those donations in my name."

This sort of stuff really is galling, particularly when President Clinton would garner over $217,000 from these 'child donations'.... only by 1997, of course. Makes you kind of wonder just how much is being filtered through such donations...

The entire relationship is suspect. And the fact that it represents such a tiny microcosm of the entire Clinton sleazosphere is itself galling.
at 7:47 PM
Email ThisBlogThis!Share to TwitterShare to FacebookShare to Pinterest
Labels: Democrats, Hillary