LGF Commenter US Beast, responding to accusations that CNN rigged debate questions in order to lob softballs at Hillary Clinton.

Now lets be fair here. You can't expect CNN or the Dems to allow ordinary citizens to question these candidates. Ordinary citizens just aren't intelligent enough to understand the mental gymnastics it takes to arrive at the positions held my these mighty intellects. The average Joe or Josephine cannot comprehend what kind of intellectual fortitude is required to ignore the world as it is and achieve the world they hallucinate envision. 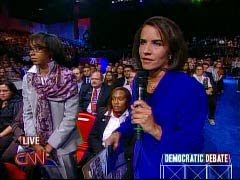 And remember, it was a bunch of these ordinary citizens that voted for George W. Bush, not once but twice.

Can you imagine the embarrassment it would cause if an ordinary citizen asked a question like: "Each of you talks about 'ending the war in Iraq'. None of you ever mention the word 'victory'. Has 'victory' become a dirty word for the Democrats or are you all a bunch of candy-assed defeatists?"

Chaos. It would result in absolute chaos.