Is Muni Wireless turning the corner?


Municipal wireless -- the promise of inexpensive broadband wireless hotspots provided by cities and towns -- may be turning the corner. After a series of deployment problems, Steve Stroh's blog highlights technical breakthroughs that could accelerate muni wireless rollouts. In so doing, consumers may finally break the back of a reconstituted telco monopoly seemingly more interested in locking down networks than improving customer experience. 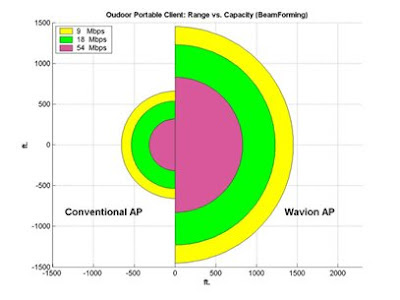 Wavion's SDMA technology creates up to four downlinks to four different users simultaneously, transmitting one data stream per user. Each stream is "beamed" by means of beamforming in such a way that the user receives only the stream directed to him, while the other steams are received below the noise level. This quadruples downlink capacity.

Breaking the back of the telco/cable duopoly will happen someday soon. And SDMA may be one way to offer real broadband to consumers, bypassing the duopoly altogether. It couldn't happen soon enough.
at 8:19 PM
Email ThisBlogThis!Share to TwitterShare to FacebookShare to Pinterest
Labels: FCC, Web 2.0