News tidbits the mainstream media is too 'busy' to report

Chuck Hagel, a GOP Senator with no real national following, gives a speech criticizing the administration's Iran policy and I see it on MSNBC and CNN. Joe Lieberman, the fomer Democratic nominee for VP, gives a speech going after the Democrats stand on national security and nothing... crickets.

I guess it's only good to have "Mavericks" in one of the political parties.

Oh, these naive youngsters make me chuckle. Remember, whippersnapper, there's no such thing as a "maverick Democrat."

So, what did Lieberman actually have to say? We have to go outside the country to find out. The Financial Times reports:

He argued that... Republican presidential candidates remained truer than the Democratic party to its tradition of a "moral, internationalist, liberal and hawkish" foreign policy that was established by presidents Franklin Roosevelt, Harry Truman and John Kennedy.

"The Democratic party I grew up in was unafraid to make moral judgments about the world beyond our borders," he said... "[Today's Democrats] are inclined to see international problems as a result of America's engagement with the world and are viscerally opposed to the use of force - the polar opposite to the self-confident and idealistic nationalism of the party I grew up in."

Hmmm. Odd that I didn't catch that speech in the newspaper.

Hillary's campaign admits to having planted a question during an Iowa town hall meeting and promises not to do so again:

The tape of the event shows that the question and answer went as follows:

Question: "As a young person, I'm worried about the long-term effects of global warming How does your plan combat climate change?

Clinton: "Well, you should be worried. You know, I find as I travel around Iowa that it's usually young people that ask me about global warming."

The campaign's admission that it planted the question may be another blow to the New York senator's image as a trustworthy politician... Clinton's critics have accused her of being a double-talker who refuses to answer tough questions specifically. Now her campaign has acknowledged planting at least one question... Already her rivals have begun to criticize Friday's revelation...

Seriously? A reporter wrote the phrase "trustworthy politician"? Put simply, this entire line of reasoning is patently unfair to Hillary. She doesn't mind tough questions, so long as they are carefully scripted ahead of time.

And how is Hillary's actual campaign going? Not well. Two New Hampshire polls are sowing panic and discord among Hillary's campaign staff. They show Hillary's lead is dropping faster than a sky-diving Michael Moore with a bad parachute:

The polls will be released this weekend and are embargoed; though I'm not privy to the embargo agreement, I'll be a little vague out of respect for the polling organizations... One of the polls shows that the gap between Clinton and Barack Obama narrowed by more than 10 points. Her biggest decline was seen among older voters... 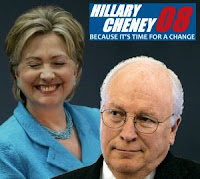 Okay, I just made that part up, but doesn't it seem a match made in heaven?
at 10:56 AM
Email ThisBlogThis!Share to TwitterShare to FacebookShare to Pinterest
Labels: Democrats, Hillary, Linkfest