CNN's entire Democratic debate appears to have been a sham from the first minute to the last. 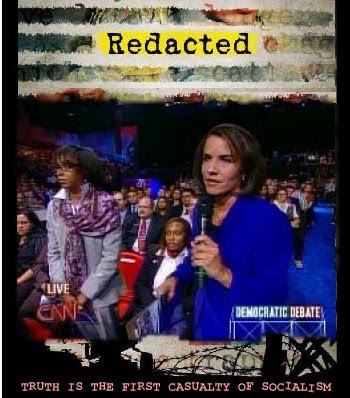 And now it's been nearly a week and LaShannon Spencer -- one of CNN's "undecided voters" (and former political director for the Democratic Party in Arkansas, which CNN forgot to mention) -- remains missing from the transcript of the Las Vegas debate.

Redacted is in the news, only it's the concept that CNN is cleaning up its post-debate mess and not the movie.

But it's only been a week. Perhaps CNN needs more time to finish up its "rush" transcript.
at 11:28 AM
Email ThisBlogThis!Share to TwitterShare to FacebookShare to Pinterest
Labels: Democrats, Hillary, MSM