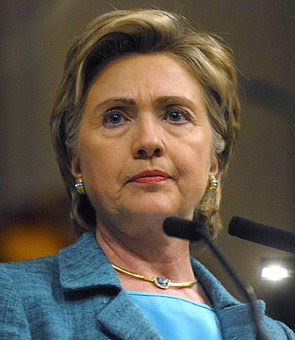 You might think the fact that progressive mouthpiece Time Magazine is covering Hillary's Chinagate problem is somewhat surprising. Until you consider that it's busily engaged in damage control. Never mind the scores of Chinese dishwashers and busboys who have donated thousands each to her campaign.

But Human Events' Right-o-meter is busy untangling the spider-web of misogyny:

Wake Up America's Spree adds, "I have seen comments elsewhere asking why they did not wait until after she was already officially named the Democratic presidential candidate after the primaries but as we all know, investigations take time and this is the perfect time for this."

Michelle Malkin thinks this story has legs: "Over the weekend, Fox News Channel’s Bret Baier asked me if the Chinatown story had traction. If conservatives stay on the story and liberal MSM outlets like the LA Times don’t cower before the p.c. police, the answer is yes."

Say Anything Blog's Rob questions the timing, and wishes this issue was saved for the general election campaign. Wizbang's Jay Tea disagrees with Rob.

The Campaign Spot's Jim Geraghty posts an interesting response from Allison Hayward, a former FEC staffer for Bradley Smith. Hayward argues that, "If they had as a policy the intent to obscure straw donors, they could. It would be criminal, but doable. Here, their reports are sufficient to track down the story. So I would suspect the problem with the campaign is nonfeasance, rather than an intentional effort to accept illegal contributions." 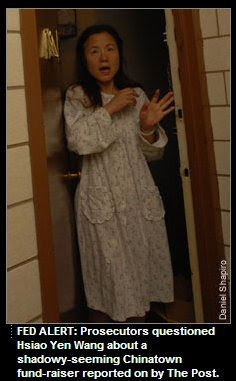 The New York Post reported earlier today that the Hsit has truly hit the fan:

The feds are eyeing a Chinatown donor to Sen. Hillary Rodham Clinton's presidential campaign to see if she was "coerced" into being a front for someone else's contribution.

Hsiao Yen Wang, who lives with her cook husband, David Guo, on the Lower East Side, got a visit from Justice Department probers in the last two weeks, she told The Post.

The criminal investigators asked her if she was "coerced" into making a donation...

It appears that Wang was on the up-and-up.

But it remains to be seen whether the scores of other laborers who donated massive sums of money to Clinton did so voluntarily... and whether they, in fact, exist at all.
at 11:34 PM
Email ThisBlogThis!Share to TwitterShare to FacebookShare to Pinterest
Labels: Democrats, Hillary