The constitution has been suspended and the country is being run under a Provisional Constitutional Order (PCO). Seven judges of the Supreme Court — along with the media, a primary target of the constitutional suspension — have declared the PCO unconstitutional. Musharraf has sacked Chief Justice Iftikhar Chaudhry and another justice, Abdul Hameed Dogar (pictured on the left) — a Musharraf loyalist — has taken the oath to replace him. At this point, Dogar has only been joined by 3-4 other justices. Similar developments are occurring with provincial high courts. 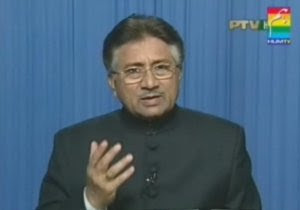 The army has taken control of the Supreme Court, surrounded the buildings of major news stations, and arrested or detained many politicians. Cable television operators have been ordered to shut the transmission of news channels. Some Pakistani channels (such as GEO), broadcast out of Dubai and so they are available to viewers not utilizing Pakistani cable (e.g. Internet/satellite in and outside of Pakistan)... 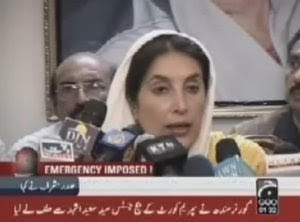 UPDATE: 3:35PM - Musharraf’s address: He then reads a passage from a text on Abraham Lincoln’s suspension of habeus corpus during the civil war. Then he reads from a letter written by Lincoln, “My oath to preserve the constitution imposed on me the duty of preserving by every indispensable means that government that nation of which the constitution was the organic law. was it possible to lose the nation and yet preserve the constitution? by general law life and limb but be protected but often a limb must be amputated to save a life…i felt that measures otherwise unconstitutional might become unlawful by becoming indispensable to the right or wrong I assumed this wrong and now avow it.” Musharraf says, “We are also learning democracy. We are going through a difficult stage. It is the nation that is important. Pakistan comes first. Anyone else’s considerations comes after Pakistan. With all my sincerity, whatever I’m doing is in the interest of Pakistan...”

Former prime minister Benazir Bhutto arrived in Karachi on Saturday night from Dubai where she was visiting her family. Upon her arrival, she was initially not permitted to deplane. She reportedly is safely in Karachi.

A Blog For All, Hot Air, and Nasir Khan are all covering the story.
at 6:00 PM
Email ThisBlogThis!Share to TwitterShare to FacebookShare to Pinterest
Labels: extremism, War