It's very rare that I find myself in total agreement with Markos Moulitsas, creator of Daily Kos. But he calls John Edwards' response to Hillary Clinton's "pile-on" video "devastating," and I have to agree. It is the "I voted for it before I voted against it" moment, on three different issues - Iraq, Social Security, and Immigration.

My hat is off to Team Edwards. This is the toughest, most effective web ad I've seen this campaign so far. Somehow it manages to be simultaneously brutal and fair, contrasting Hillary's own words with herself, often only seconds apart.

Watch it. Rest assured this won't be the last time you see it.

It's not that she doesn't know what she believes; it's that she's afraid to tell us what she believes. She's afraid to tell us what she really wants to do. The Clintons want to appear to be for and against everything. They want to play both sides of every issue down the middle so you never really know, because the purpose of this is to cover the agenda, cover it up, and then prevent it from actually getting out. We know what the agenda is... 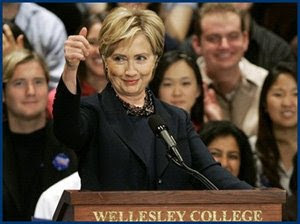 ...one day she wants to be thought of as strong like a man, as a member of the boys club. Then the other times, she's just this victim... "They're beating up on a girl! ...It isn't fair! So I'm going to go play the gender card. I'm going to go back to Wellesley."

...this is not working out [for her]. It's not. She's blowing this big time, I'm telling you. Not with rank-and-file Democrats... but the undecideds, the so-called independents. ...So now she's a girl. Before she was just as good as a man, just as strong as a man. So what are we to do now? How are we supposed to treat and how are we supposed to react to Mrs. Clinton? Is Hillary equal to a man? Is Hillary a girl? What do her supporters want us to know now? What does Clinton, Inc., want us to think of her, and what are they going to want us to think next hour? Is she a girl now, or is she a man?

I wonder if the Iranians, the Syrians, the terrorists, the Chinese, or the Russians care if she's a girl or not.

Update II: GM Roper's 3,627 faces of Hillary is a must-see.
at 9:39 AM
Email ThisBlogThis!Share to TwitterShare to FacebookShare to Pinterest
Labels: Democrats, Edwards, Hillary