ACORN teams up with ACLU to throw out Penn Voter Law


Fox4KC reports that ACORN has all but admitted its guilt related to various Pennsylvania vote fraud indictments:

So, what do you do if you are the Association of Community Organizations for Reform Now (ACORN) and you are accused of violating state election laws? What else but hire the ACLU to try and get those laws thrown out as unconstitutional? 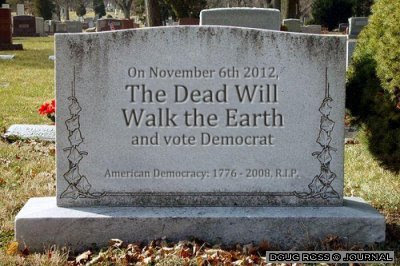 In Pennsylvania, six members of ACORN have been indicted for violating a state election law prohibiting groups from setting quotas for voter registration drives. The ACLU claims that this rule violates the constitutional right of ACORN to utilize "commonplace management tools" and techniques to manage its paid workers.

But the statute is clearly meant to maintain the integrity of the voter rolls, something that ACORN just as clearly violated with its illicit practices to inflate voter rolls with fake Democrat voters.

The statute says, "A person may not give, solicit or accept payment or financial incentive to obtain voter registration if the payment or incentive is based upon the number of registrations or applications obtained."

During the voter drive, ACORN set quotas for workers that ended up seeing that quotes were met by creating fake voter registration cards.

ACORN and the ACLU, it seems, couldn't care less about the integrity of elections and the legality of voter registrations.

One thing that this ACLU lawsuit seems to prove, however, is that ACORN admits its guilt in the matter. If it were not guilty of falsifying thousands of Pennsylvania voter registration cards, why then would it need to get rid of the statute in question?

ACORN is... issuing an admission of guilt. ACORN knows it perpetrated vote fraud and now wants to go back and change the law to paper over its guilt.