The disconnect between the Democrats' radical left leadership and American taxpayers becomes more apparent by the day. The latest from Pew Research confirms other recent polls that show the National Socialist Democrat agenda is just a tad less popular than sand-flavored ice cream. 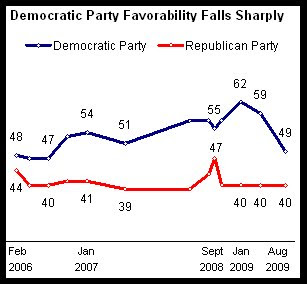 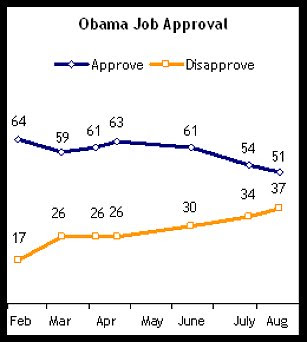 As for the job approval ratings for the Pied Piper of Chicago -- they look like a goose deposit hurtling onto the tarmac.

Although the Obama administration and some economists have touted the early signs of an economic recovery, the public is, if anything, more gloomy about the economy than it was two months ago. Ratings of the national economic situation remain dismal, with 52% saying the economy is in poor shape, and 38% saying its condition is "only fair."

I'm no poll-watcher, but the radical Democrat agenda of quadrupling the deficit, passing the Waxman-Markey energy tax and a massive system of socialized medicine have poked the hornet's nest one too many times.

Should another whack hit the taxpayers, there will be a political backlash the likes of which America hasn't seen in decades.