When folks said you couldn't send billions of dollars in defense spending to tiny towns in Western Pennsylvania, you proved them wrong...

You awarded no-bid contracts over the objections of the Pentagon, the DEA, the White House, and federal auditors.

Someone's knockin'... warm up the shredder...

And when nosy reporters found out that you'd directed $250 million to non-profits headed by your friends and family... You just blamed it on a right-wing conspiracy... even though your net worth soared $11 million in four years.

I had a winning streak in Vegas... Or when you were videotaped taking a hundred grand during an FBI sting operation... You claimed you were just trying to help the feds, though you stashed ninety grand in your freezer.

WhoooooooooaaaaAAAAH! My tongue is stuck to a Hundred... 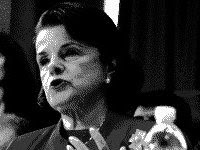 And when nay-sayers claimed you couldn't direct billions to your husband's defense firm, even while you were serving on a defense appropriations committee, ...you just laughed at them!

I shoulda been a Senator... So crack open an ice-cold box of Pork Lite wine, oh Senator Conflict-of-Interest. We know that when it comes to your personal integrity, only two things matter... that we're not wearing a wire and that we've got a cashier's check made out to your son-in-law.