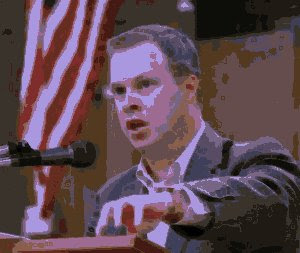 After that Oscar-worthy performance, Driehaus washed off the makeup and exposed his true face.

He subsequently voted for the trillion-dollar Stimulus package, the disastrous Obama budget, as well as "Cap-and-Trade"; in toto, the largest spending frenzy in world history.

Put simply, ignoring his promises to constituents, Driehaus instead kissed Nancy Pelosi's feet and worshiped at the altar of radical leftism.

In early August, Driehaus held a town hall meeting to "take the pulse of the community" on ObamaCare. The result was a frustrated crowd as Driehaus filibustered, bobbed and weaved to disguise the fact that he was simply toeing the Obama line. 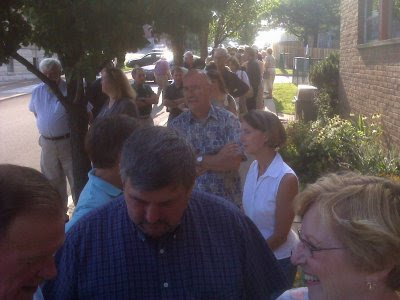 The mostly elderly, respectful crowd grew weary of the dissembling and erupted with a chorus of boos and shouts. After 90 minutes of pap, Driehaus called a halt to the proceedings and the large crowd dispersed. 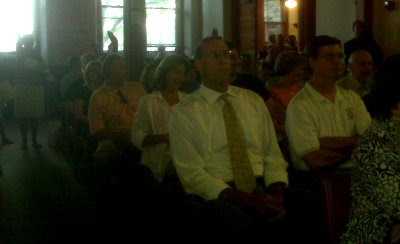 The message was clear by at least an 8-to-1 ratio: his constituents do not want socialized medicine or any form of government tampering in the insurance markets.

The Cincinnati Enquirer reports today that Driehaus is ready to hold his next town hall, only this one will be an invitation-only affair. The Democrats' paid thugs -- mostly ACORN and SEIU types -- are certain to fill the seats and prevent taxpayers from expressing their firm opposition to socialized medicine.

County Democrat officials emailed supporters earlier, stating that demand "for this event has been very high and, as a result, the Green Township Democratic Club has now been forced to move to a ticketed format... At this point, the very limited seating in the hall has already been claimed and only those with tickets will be admitted."

Driehaus' refusal to meet with constituents means that he is certain to vote for socialized medicine. Reports from the district indicates he has been ducking citizens for weeks.

In truth, this gathering can't be classified as a town hall. It is simply a pep rally for Obama's statist agenda.

Who does Steve think he is and who does he think he is dealing with? Does he not think we'll remember all of this at election time? Everyone in office in DC is hiding or pulling this type of stunt. This guy works for us and should be available 24/7 considering what is going on and what is at stake... What does Steve do? He sets up an insider only event where he can get sunshine blown up his skirt.

The anti-Driehaus momentum is building early and is strengthening. Objective Democrats (those without Kool-Aid stains on their lips) disagree with what is being done and how it is being done. They will remember. As for moderate Republicans, you’ve burned that bridge already.

Unlike Obama, who turned out to be everything he said he was, you are nothing you said you were. As a representative of the people in your community you are an abject failure.

Have your party Steve; take a lot of happy pictures for your scrapbook, you’ll need them.