I don't know what conservatives are complaining about when they observe that the Kennedy grandkids were trotted out at his public funeral ceremony to pimp socialized medicine. It's not the first time such an event has been politicized. Why, don't you remember this brief prayer from President Reagan's funeral service? 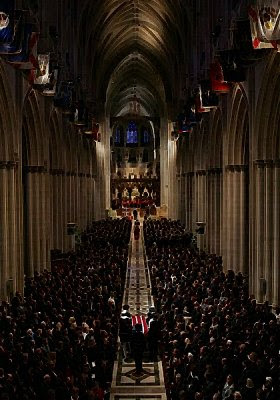 Dear Lord, we beseech you to instill in all persons of this great land...

...an abiding desire to respect the rights of the individual as envisioned by this nation's founders.

To enact a flat tax, which protects the individual's private property from unjust confiscation by an out-of-control federal government.

To promote the continued development of a missile shield, which will make our nation immeasurably safer.

And to slash the size and budgets of federal bureaucracies by 20% or more, as they exceed any powers granted by the Constitution.

And it is only fitting that these policies are enacted immediately in honor of President Reagan's passing.