Gee, what a surprise: Obama bankrupting U.S. faster than he estimated


Reuters reports that President Obama will raise the projected U.S. deficit to $9 trillion, consistent with the original CBO estimate and roughly equivalent to a dozen Iraq/Afghanistan wars. 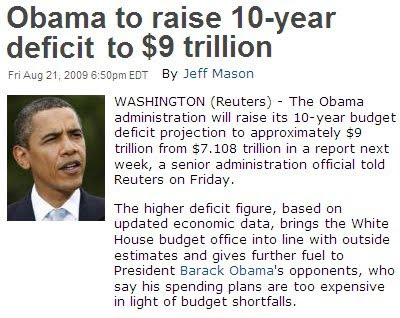 The White House took heat for sticking with its $7.108 trillion forecast earlier this year after the Congressional Budget Office forecast that deficits between 2010 and 2019 would total $9.1 trillion.

"The new forecasts are based on new data that reflect how severe the economic downturn was in the late fall of last year and the winter of this year," said the administration official, who is familiar with the budget mid-session review that is slated to be released next week."

I could recite the litany of spending disasters by the Obama administration, but I won't. As Marx, Lenin, Stalin, Castro and Chavez found out, centralized planning of the economy never works.

Letting people keep more of their money -- to pursue entrepreneurship, invention, innovation and investment -- is the only antidote to a diseased economy. Cutting taxes, a mechanism that has proven so effective, so often, I can't believe anyone would even try to dispute them... cutting taxes lifts all boats. Tax cuts are the opposite of a "stimulus" package. They are a rallying cry for economic expansion.

Tax cuts, however, are anathema to Democrat Statists who seek control of your private property. They who seek to control the size of your cars, how much energy you can consume, how much water your toilets can flush, what kind of light bulbs you can buy... anything and everything related to your privacy. Interestingly, it never ends with Democrats. They always want more control of you and your private property. Now it's your physical well-being -- socialized medicine and control of your body. And, after that, they'll want more.