Blog ads really are good for marketers; they outperform TV! 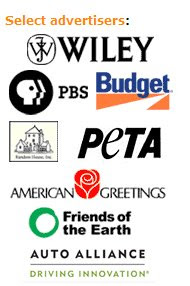 Online advertising can be as effective as television advertising in lifting retail sales of CPG brands, according to a new study from comScore and dunnhumbyUSA.

The study, based on a 200,000 panel of consumers who were members of grocery store loyalty programs, indicated that online advertising lifts retail sales of CPG products by an average of 9%, compared to an average lift of about 8% from TV campaigns (measured by Information Resources, Inc. and published in their seminal research paper How Advertising Works).

The comScore dunnhumbyUSA research was conducted by examining the retail purchasing behavior of members of the comScore panel of 2 million internet users who have given comScore explicit permission to monitor their online behavior...

...because online advertising is generally less expensive than television, the results take on even greater significance.

Get yer steaming hot Blogads here! Get 'em before they're all gone!

at 7:56 PM
Email ThisBlogThis!Share to TwitterShare to FacebookShare to Pinterest
Labels: eBusiness, Marketing

i'm gonna make my own journal