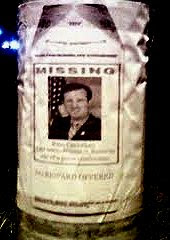 The scuttlebutt around the Beltway says that the White House is willing to drop health reform's 'public option' as Democrats, home on August recess, cower in fear. A midterm election looms, less than 15 months away, and an enraged, energized electorate is giving their representatives hell, ignoring the astroturf and union thugs bused in to put them down.

In many districts, Democrats are avoiding constituents altogether, resulting in a new characterization: "Milk Carton Dems".

The President's approval ratings are in the toilet along with Congress, the conservative wing of the GOP is as energized as it's ever been, and taxpayers who've never been moved to political involvement are readying torches and pitchforks.

So, in this difficult time for Democrats, a visit to the left side of the blogosphere was warranted. Equipping myself with a Haz-Mat suit (suitable for Biosafety Level 4 Hot Zones) and a laptop, I've returned from that mission horrified and shocked at what I've seen.

Consider the denizens of the ill-named "AmericaBlog" -- ill-named because its supporters so obviously hate the founders, the Declaration of Independence and the Constitution:

I don't understand why Democrats are always so willing and desperate to compromise with themselves. The GOPers don't want any reform bill. Their base, comprised of the teabaggers, birthers and deathers, won't let them negotiate. So, Democrats compromise with themselves, again -- and sell out their principles, again. Just like they did on the stimulus package - they gave the GOP nearly 40% of the package in tax cuts, and how many votes did it get them in the entire Congress? Three.

The overwhelming public mistrust of socialized medicine be damned! We've got socialist principles to install, so get the hell out of the way!

• jimfromthefoothills firmly states, "Remember, we are going to rebuild every school, bridge and road in the country. We will fix healthcare. We will restore the constitution, end illegal wars [and] reduce emissions of greenhouse gasses." ......... And then luscious chocolate-chip cookies will drop from the sky, multi-colored unicorns will everyone give free rides to work and school, and Karl Rove will get frogmarched out of Fox News in primetime. As an aside, Jim is still living in the foothills and apparently ate some bad possum before posting.

• sandra adroitly observes, "Obama has succeeded in showing us that the corrupt corporations hold the power, the crazy screamers have succeeded, and democracy has failed us, big time." ......... If by "corrupt corporations", you mean the companies that pay billions in taxes and employ millions of American taxpayers... and by "crazy screamers", you mean "pissed-off taxpayers"... and by democracy failing "us", you mean ACORN, the SEIU and other paid agitators are outnumbered by the taxpayers... well, yes, you're spot on.

• mtiffany threatens David "Svengali" Axelrod and Rahm "Al Capone" Emanuel, stating that if "there is a public mandate to buy insurance without a public option, I'm NEVER voting for the Democrats EVER again." ......... Well, Tiffany, I'm sure all of the capitalization scared them back into line.

• Gridlock is madder than a Democrat forced to comply with the Constitution, "...so the inmates in the nuthouse have won, now they'll be screaming about this forever (at least until they get sick and die without the healthcare they succeeded in killing) and Failbama failed miserably at the first big task in front of him... Nice job. 0 for 0, Barry... Enjoy the rest of your hamstrung term, you f***wit." ......... No snide comments are necessary on my part, because the Secret Service is currently chasing Gridlock down the street, flip-flops, shopping cart and all.

• Bostonian_Queer_in_Dallas is thoughtful and introspective. "I sit here today on the 40th anniversary of Woodstock and now realize that we were the most spoiled brat generation ever in this nation because ultimately our liberalism of 1969 was to save our own asses from going to Nam, it had nothing to do with making the nation better or helping the downtrodden because we all went out and cut our hair and became part of the machine to make money by f***ing everyone. It was all about basic cowardice and selfishness and getting stoned. F*** us. The Boomers have sold out and don't give a s*** about anyone but themselves. It is very depressing. I did not sell out. I did good in the world by going into teaching. So now I'm just poor and unhappy. I was a total fool. I shoulda sold out like everyone else did. I was really f***ing stupid to hold onto ideals. You made your f***ing bed now lie in it Boomers." ......... I really need to know what school district this guy teaches in --- my kids need that type of edumacation.

• Dateline_Molly lets it all hang out. "This is probably enough to get me thrown off a conservative blog like this one, but I'll say it anyway: The underlying cause of the problems is CAPITALISM. Nobody seems to want to address this even though it is the elephant in the room... And we are seeing the same kind of irrationality in this health care debate. It is irrational strictly on an economic level not to have at least single payer, if not nationalized health care. Every study proves that it would save us money... I don't know how you disentangle from this corrupt web without dismantling American capitalism." ......... Like Cuba and the Soviet Union! The CCCP worked out so well for all involved (if you ignore the 100 million killed by Communism -- but who's counting?).

• jimfromthefoothills returned to his dialup connection after mixing up a delicious crawdad-and-roadkill stew, to add: "Barry sold us a paradigm shift. Remember... turn the page? Write a new chapter in American History? He sold us revolution and he delivered Choco-Bush." ......... Choco-Bush? But I thought it was the evil right-wingers who were the racists?

• jimfromthefoothills has some more Democrat tickets to suggest, "Dean\Krugman, Reich\Waters, ANYBODY BUT OBAMA" ......... Oh, goodness. Tummy. Hurts. Must. Stop. Reading. Hard to breathe.

• Best progressive idea yet: responding to a suggestion that the party primary Obama in '12, SCLiberal responds, "I still think MoveOn should put forth a true liberal candidate."


Update: Ruh roh. Michelle Malkin says that the plan to drop a public option may be a trial balloon and not a white flag. Stay vigilant, folks.