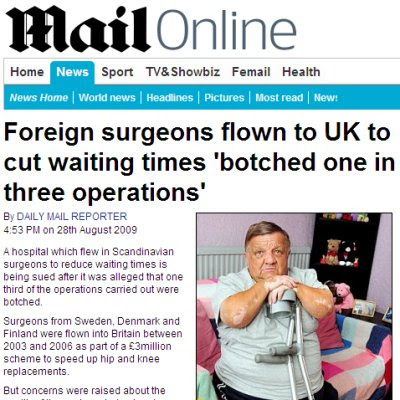 A hospital which flew in Scandinavian surgeons to reduce waiting times is being sued after it was alleged that one third of the operations carried out were botched.

Surgeons from Sweden, Denmark and Finland were flown into Britain between 2003 and 2006 as part of a £3million scheme to speed up hip and knee replacements... But concerns were raised about the quality of the work carried out and many patients fear the surgeons were insufficiently trained or skilled...

Gee, grandpa -- I can't wait for government-run health care, can you?

Look on the bright side: it was only one in three!