RED ALERT: Bill would give Obama 'emergency' control of Internet 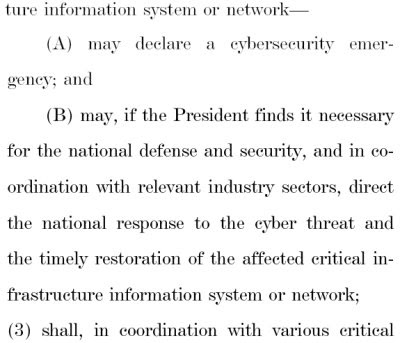 The bill would allow the president to unilaterally declare "a cybersecurity emergency" for non-governmental computer networks in order to respond to a threat.

Other sections of the bill go even further: they proscribe government-controlled certification programs that license computer security professionals. And it goes on to demand that certain, privately-owned computer systems and networks be managed only by those professionals who have achieved the federal certification.

"I think the redraft, while improved, remains troubling due to its vagueness," said Larry Clinton, president of the Internet Security Alliance, which counts representatives of Verizon, Verisign, Nortel, and Carnegie Mellon University on its board. "It is unclear what authority Sen. Rockefeller thinks is necessary over the private sector. Unless this is clarified, we cannot properly analyze, let alone support the bill."

Representatives of other large Internet and telecommunications companies expressed concerns about the bill in a teleconference with Rockefeller's aides this week...

Hey, it's only centralized government control of the Internet.

In all seriousness: if you were elected President and wanted to transform the U.S. into a third-world banana republic like Venezuela, how would your policies differ from those of Obama?

Can anyone recommend the robust IT automation software for a small IT service company like mine? Does anyone use Kaseya.com or GFI.com? How do they compare to these guys I found recently: N-able N-central remote windows login