Government Spending: Please Sit Down Before Reading This One


To put the Obama-Pelosi-Reid spending frenzy into historical perspective, I turn to this graph, culled from Grant's Interest Rate Observer, dated August 21, 2009:


No government in the history of the world has engaged in this kind of orgiastic spending spree. The results thus far? 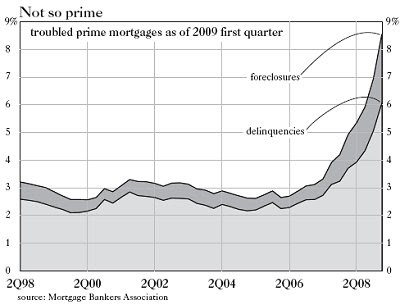 Prime mortgages (those issued to borrowers with the highest qualifications) are defaulting at an unprecedented rate. 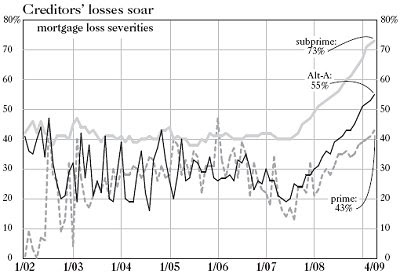 And, in every loan category, losses are demolishing the balance sheets of financial institutions. 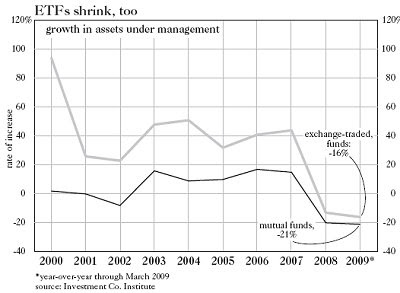 Over the last two years, mutual fund assets under management have diminished by 20% annually.

On the February earnings call, James E. Rohr, PNC’s chairman and CEO, sounded as cheerful as Barack Obama used to before he took office. “We’ve been open for business throughout this period by adhering to our business model and leveraging our success at building long-term relationships with our clients, and by allocating capital based upon risk-adjusted returns, we’ve delivered significant value to the shareholders over time.”

So far as the dividend is concerned, there will be 85% less of it, PNC disclosed on Monday, suggesting it was the regulators’ idea. Up til then, the Pittsburgh-based super-regional had been on the offensive. At the end of December, it doubled its customer base by swallowing Cleveland’s National City Bank for $5.6 billion of stock and an odd lot of cash. The combined entity shows $291 billion in assets, $175 billion in loans and $193 billion in deposits. It has a 33% ownership stake in Black-
Rock, a capital-markets business and a custody business. Nonperformers stand at 74 basis points of total assets, and the allowance for bad loans covers 236% of known duds. National City was choking on bad loans, home-equity credits among others, and PNC was able to mark some of these assets as low as 42 cents on the dollar.

Come the turn, shareholders will thank CEO Rohr for his courage and foresight in buying low. Pending that happy event, however, they will have to live with the possibility that Rohr did not, in fact, buy low, but rather, like so many others on Wall Street, mistook a calamity for a business cycle. As the regulators count capital, PNC is amply covered, with a so-called Tier 1 ratio of capital (equity and preferred) to assets of 9.7%. But the market puts no more stock in the bank regulators these days than it does in the ratings agencies, and the market is focused on tangible common equity. Preferred doesn’t count. “Owing to the National City acquisition,” colleague Ian McCulley observes, “PNC has a tangible common equity ratio of just 2.9%. Asked on last month’s call if another capital raise is in the offing, management was noncommittal...

But don't worry, the vast amount of real world, executive experience among the likes of Frank, Obama, Pelosi, Rangel, Reid and Schumer are certain to lift us out of this mess.

Just trust 'em. They insist they know what they're doing.